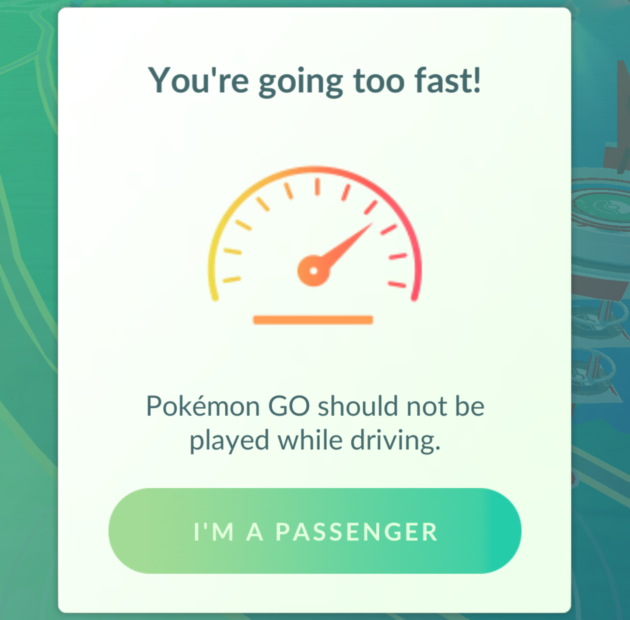 Pokémon Go is a hit all over the world, so much so that some people can’t stop playing it, even when they are driving. The game’s developer, Niantic, is trying to do something about that.

A minor update to the game Monday added a dialog box, warning aspiring trainers not to play while driving. Players have to exit out of the prompt by saying they are the passenger, not the driver. A previous update to the game included a change to the scanning technology for finding Pokémon. That made it less likely Pokémon would appear for trainers traveling by car rather than on foot.

Since the game’s release last month, numerous Pokémon accidents around the world have been reported. The first incident in the state of Washington occurred last month when a 28-year-old man who said he was playing Pokémon Go while driving the speed limit rear-ended a Chevy that was stopped in the road near Fall City, Wash. waiting to make a left turn. A 19-year-old man in Australia crashed into a school in late July after losing control of his vehicle while trying to catch a Pokémon as he drove through a roundabout. A driver in Baltimore slammed into a police car last month while playing the game.

Will the actually stop players from Pokémon hunting while driving? The most determined players could just click through the prompt and continue playing and driving.

But there are signs that law enforcement around the world is starting to crack down on distracted-driving trainers. In Japan, law enforcement officials said last week they had issued more than 700 traffic citations to drivers playing Pokémon.

Here’s the full list of changes in the latest iOS update of the game.

– Added a dialog to remind Trainers that they should not play while traveling above a certain speed. Trainers must confirm they are not driving in order to continue playing
– Made improvements to the accuracy of a curveball throw
– Fixed a bug that prevented ”Nice,” ”Great,” and “Excellent” Poké Ball throws from awarding the appropriate experience bonuses
– Fixed achievements showing incorrect Medal icons
– Enabled the ability for Trainers to change their nickname one time, so please choose your new nickname wisely
– Resolved issues with the battery saver mode and re-enabled this feature
– Added visuals of Team leaders – Candela, Blanche and Spark
– We’re currently testing a variation of the “Nearby Pokémon” feature with a subset of users. During this period you may see some variation in the nearby Pokémon UI.
– Minor text fixes