But with perseverance, determination, a little luck, and a lot of hard work, Scott has defied stereotypes during his remarkable career with the Seattle Sounders FC.

The 36-year-old will play his final professional soccer match Sunday afternoon at CenturyLink Field. Known as “Mr. Sounder,” Scott spent his entire career — 15 seasons and 349 games — with the Sounders organization, starting in 2002 when the team was part of the United Soccer League, to when the club entered Major League Soccer in 2009, and all the way through to today.

At 36, Scott is healthy enough to play professionally for at least a few more years. But the Hawaii native and tech geek is looking forward to his post-soccer life, working in business development for Seattle-based Slalom Consulting.

“If I could project five-to-ten years down the line, I would be severely disappointed in myself for not taking this job now and passing up the opportunity,” Scott said on stage at the GeekWire Summit earlier this month. 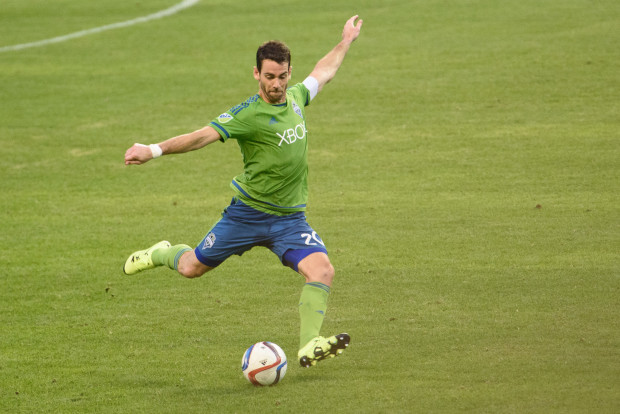 It will be bittersweet for Scott on Sunday in Seattle, where the Sounders will honor him with a pre-game ceremony and bobblehead giveaways. He’ll say goodbye to the only team he’s ever played for, first joining the Sounders as a raw-yet-scrappy 22-year-old fresh out of Gonzaga in 2002. He’s the only remaining player on the roster from Seattle’s pre-MLS era.

After graduating with a math degree and a teaching certificate, Scott — who was a walk-on at Gonzaga — wasn’t exactly the most sought-after player by professional teams. But he decided to try out for the Sounders, which was then part of the United States League’s First Division, essentially a minor league that fed into the major league clubs.

“I think Brian and I always had very similar personalities,” Scott said. “We appreciate the guys that work really hard and have the potential for great things.”

When the Sounders joined the nation’s top league, MLS, in 2009, Scott was ready to hang up the cleats. He surely wasn’t guaranteed a spot on the new team and was starting a family with a new wife and first child.

“To be honest, I was all set if it didn’t work,” Scott recalled. “I had a degree and was ready to go into teaching. We were also thinking about moving back to Hawaii. But I wasn’t going to give up this opportunity and look back and say I didn’t try my hardest to at least make this club.”

Scott defied expectations again, landing a spot on the squad and starting in the club’s first match ever. He’s played a pivotal role for the past seven seasons as a reliable veteran defender who is never the most talented player on the field but perhaps the hardest working. Scott’s playing style helped him quickly became a fan favorite and a leader in the locker room.

Part of Scott’s success can be credited to pure grit and fight, which he says comes from his upbringing. He’s also stayed healthy thanks to weightlifting and eating healthy from the beginning of his career.

Another key to success: Scott said he’s been open to learning how to improve, each and everyday.

“Whether it’s a rookie asking me something or a veteran coach, I’m so open to not only help, but also criticism,” he said. “If you can criticize me, I may not completely agree with you, but I can find truth in your criticism and improve so next time it doesn’t happen.”

Being around professional soccer for so long has also given Scott an inside look at how technology has changed the game. The Sounders have been one of the more forward-thinking teams in all of sports when it comes to using new gadgets and software to improve player performance. The club uses everything from wearable trackers that track movement and sleep to an early warning system that can detect potential for injury.

“If you buy into it, it’s something that can definitely benefit you,” Scott said of the technology.

But Scott noted that there is a balance between relying on data and technology to drive coaching or player decisions. That’s even more true for a guy like Scott, whose value cannot be fully quantified in numbers.

“There’s only so much you can pick out of data,” said Scott, who has a passion for tech and business. “You still need to pass the eye test.”

Though he’s retiring from soccer, the work won’t stop for Scott. He’s already spent the past six months in a part-time role at Slalom, a 4,000-person company that works with some of the world’s top corporations, and will take on a full-time job in January.

Scott said he’ll take away plenty from the soccer field into the business world — for example, failure.

“I failed in so many aspects of being a pro soccer player, but I’ve been able to build on that failure everyday, quickly learn, and move on fast,” he said. “Failure will happen in the business world.”

He’s also looking forward to spending more time with his wife and three kids. Balancing work and life at home can be tough for a professional soccer player, given the evening and weekend matches and travel.

Asked about what he’ll miss the most from his days as a Sounder, it’s also about family for Scott.

“I’ll miss the joy of taking my kids down to the field after a win and watching them kick a soccer ball around,” he explained. “That was always my goal, to play soccer long enough that my kids would be old enough to remember this time in their lives and how unique and fun it was. But we’ll definitely be in the stands cheering them on.”