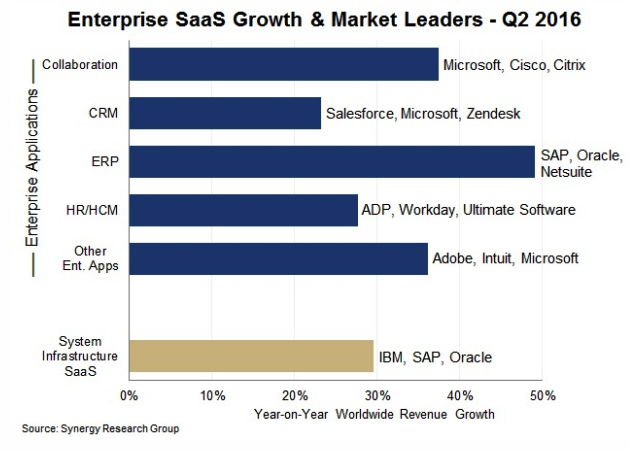 Microsoft has become the world’s largest provider of enterprise software as a service (SaaS), according to a new study, surpassing the company that virtually created that model of computing: Salesforce.

According to Synergy Research Group research director John Dinsdale, Microsoft in the second quarter chalked up 15 percent of worldwide SaaS revenues, compared to Salesforce’s 14 percent. In the year’s first quarter, they were tied at 14 percent, and before that “Salesforce was always on top,” Dinsdale said in an email.

Most of Microsoft’s SaaS revenue comes from Office 365, the extremely popular package of word-processing, spreadsheet and presentation programs that went online in June 2011. Other Microsoft online offerings include Dynamics CRM and Live Meeting. For its part, Salesforce was conceived as a SasS-based company, in 1999.

In a research note released Sept. 1, Synergy grouped Microsoft with Cisco and Citrix as a leader in the SaaS collaboration segment, which it said accounted for about 40 percent of the total worldwide SaaS revenue for the second quarter. Synergy put Salesforce, Microsoft and Zendesk in the CRM space, accounting for about 25 percent.