SAN FRANCISCO — Starbucks might seem to be on every corner in some cities, but soon the coffee giant will be in Microsoft Outlook, as well. 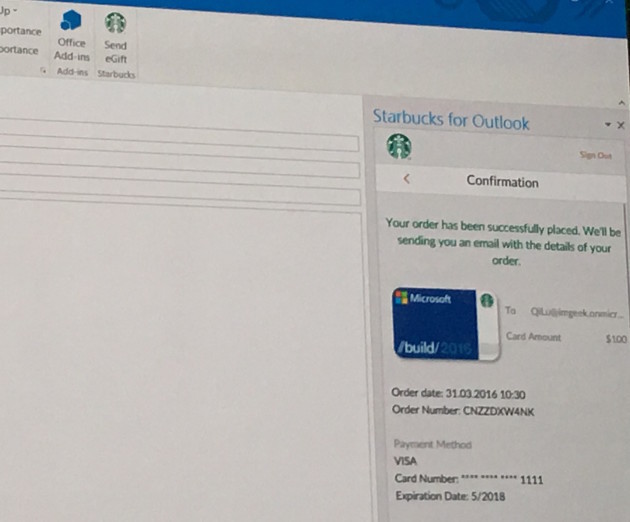 The feature will let Outlook users quickly schedule meetings at nearby Starbucks locations, and purchase and send Starbucks gift cards without leaving the email program. It will be accessible from the ribbon in Outlook to people who install the Starbucks add-in, once it’s available.

Martin-Flickinger described the feature as a natural next step in Starbucks’ technology evolution. The company has made significant progress with features such as Mobile Order & Pay, which lets customers buy coffee on their phones before they get to the Starbucks store.

The demonstration was part of Microsoft’s effort to further position its Office software as a platform for other companies and developers. Microsoft has been expanding the reach of Office through the Office 365 subscription service —which counted more than 20.6 million consumer subscribers as of the end of 2015 — and by making the Office apps available for free on Android and iOS.

Starbucks announced last week that it’s working on a new Windows app for Starbucks customers, an important step for Microsoft’s mobile operating system. The coffee giant has largely focused on Android and iOS up to this point. Kevin Johnson, the former Microsoft Windows division president, was appointed as Starbucks’ president and chief operating officer last year.

Qi Lu, the executive vice president of Microsoft’s Applications and Services Group, said the company is in the middle of “a massive undertaking to transform the Office products into services and micro-services.”