LAS VEGAS— Kevin Spacey is hopeful that the movie business will innovate and adopt new technologies in creative ways, avoiding the pitfalls that decimated the music industry.

“I think the Netflix model has demonstrated that we learned the lesson the music industry didn’t learn,” said Spacey, the Academy Award-winning actor who starred in Netflix’s hit House of Cards. “Give people what they want, when they want it in, in the form they want it in at a reasonable price, and the chances are, they will buy more likely than they will steal it. It is not to say we will take theft away, but I think we will take a bite out of it.” 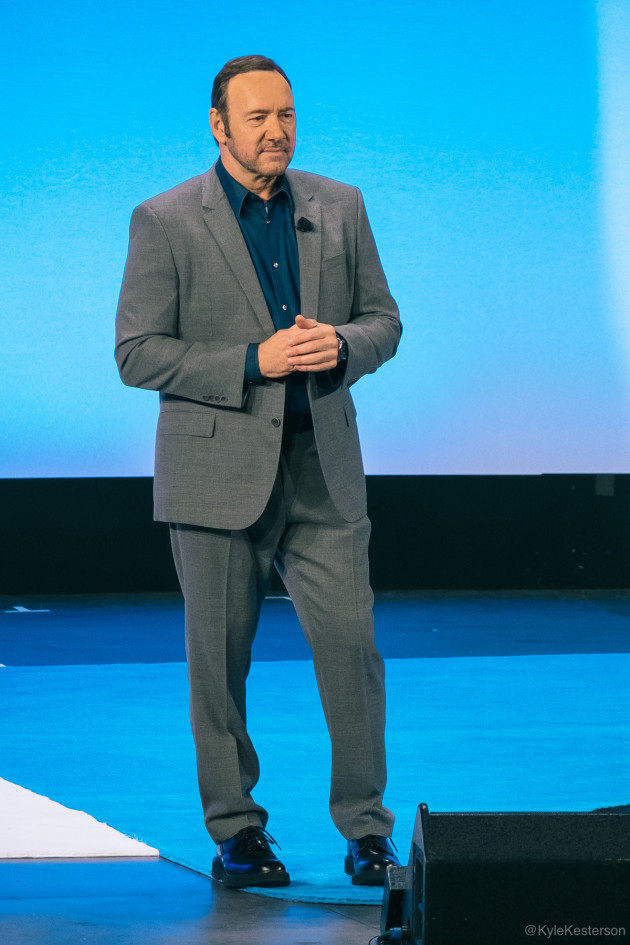 The star of The Usual Suspects and American Beauty noted that the traditional constructs of a movie or TV show are breaking down.

And he’s OK with that.

“Technology’s impact on communication is the name of the game,” he said. “This revolution in technology that we are in the midst of, this constantly evolving cornucopia of devices and platforms and apps is producing amazing new opportunities for creating content and consuming content and engaging audiences.”

Spacey said stories can be relayed in Vines or Tweets or Instagrams, and now “all of us are in the business of telling stories.”

“The good news is — with the emergence of all of these new platforms and new technologies — there’s never been more opportunities to create and consume stories that stand out from the crowd,” said Spacey, contrasting that with his own experience as a young actor when he had to fight and claw for his first lucky break, retelling a funny story from his early career of stealing an invitation to a fancy cocktail party in order to meet theater and opera director Jonathan Miller.

Today, he said, great artistic talents can be discovered by posting their work to YouTube.

Technology is giving everyone the power to tell their stories, and many of us are already doing it.

“Anyone with Internet access and an idea can potentially develop an audience,” said Spacey, noting that Hollywood historically was very good at “building walls up” to prevent people from participating. “Now, the Internet is democratizing those opportunities and flipping the conventional formula on its head. A teenager using Snapchat can command a global audience from her kitchen. An amateur musician can score a record deal by uploading songs to YouTube. Technology is giving everyone the power to tell their stories, and many of us are already doing it.”

Spacey then put this content creation phenomenon in perspective, noting that the average Facebook user creates 90 pieces of content each month. That translates into 30 billion pieces of content on Facebook each month. On YouTube, almost 3,000 days worth of videos are uploaded every 24 hours, which is more content in a month than the three major TV networks have created in the past 60 years.

“The industry itself is desperately trying to keep pace,” said Spacey, noting that content is now coming in “all shapes and sizes” across a variety of devices.

“The device and the length, they don’t even matter anymore. In fact, I think one of the big challenges in my industry in the days coming ahead is to come to grips with the decreasing delineations between different forms of media. I mean, what is a TV show after all? Or a film? The labels seem to be useless, because for an increasing number of us, there is no difference between watching Jurassic Park on your iPad or watching Homeland on your desktop computer. We don’t care anymore that a show is scheduled for 8 p.m. on Tuesday night. The rules don’t matter.”

Spacey’s advice to the crowd?

Keep innovating. Engage with audiences in new ways. And don’t be afraid to take risks.

“The more we try new things, the more we will learn about our audiences, the more doors will open, both creatively and from a business perspective,” he said. “I think risk-taking is an essential responsibility for all of us.”

He added that we are no longer living in a linear world, concluding with this inspirational tidbit about how we should all aspire to be innovative.

But make no mistake: No one ever breaks ground by playing it safe. And, if you are like me, and are intent on pushing the boundaries of your work and challenging your audiences, then you always need to try to be a step ahead, to surprise them, maybe even to take them to new places that they have never been before, because they want to go. They are dying to go. It is entirely up to us whether we are going to be inviting and take them along.”

Previously on GeekWire: ‘House of Cards’ star Kevin Spacey: Virtual reality will be a ‘quantum leap forward for storytellers’