A number of big-name tech companies have landed in Seattle in recent years, attracted by top-notch engineering talent and a well-regarded computer science program at the University of Washington.

But Austin-based Indeed — the massive job search engine which last year posted nearly $700 million in annual revenue and attracts 180 million unique visitors per month — got its start in Seattle five years ago through a little bit of happenstance tied to marriage.

“It was not 100 percent intentional,” recalled Indeed president Chris Hyams, who was in Seattle this week and chatted with GeekWire about their Seattle expansion plans. “It was not like we sat down and came up with a strategy” to be in Seattle.

As it happened, one of Indeed’s senior engineers — R.B. Boyer — decided to move to Seattle after his wife got a job in the city. Instead of letting Boyer take his skills somewhere else, the management team at Indeed — which had been split with technology operations in Austin and business operations in Stamford, Connecticut — decided to let him work on his own. Shortly thereafter, the company jumped on another opportunity when a talented engineer — who they had wanted to join Indeed for some time — left his current gig because his wife had received a job in Seattle.

“We rented a little office for the two of them, and they started working there. So, it was kind of this accidental” thing, said Hyams.

Fast forward to today, and it is no longer an accident that Indeed is in Seattle, a hotbed for data science and search technologies.

Indeed is growing like gangbusters in Seattle, with some of the company’s most important products originating from the Pioneer Square offices.

More than 80 employees now fill Indeed’s hip offices at 1008 Western Ave., a place where bikes often clutter the office lobby. The company — which employs 3,000 worldwide and is on pace to top 4,000 people by the end of the year — plans to add another 40 employees in Seattle in the next four months.  It marks one of five engineering offices that the company operates worldwide, joining centers in Tokyo, Hyderabad, San Francisco and Austin.

Why the growth in Seattle?

The big tech titans like Amazon, Microsoft and Expedia help, but so does the quality of life.

“A hundred years ago, companies would establish in a location and people would move to Detroit, because that is where the work was. I think that in 2016, companies go to where the talent is,” said Hyams. “And there is a great talent pool (in Seattle), and what attracts great talent is a high quality of life and availability of jobs. That’s what drives Austin’s economy, and I think that is what is one of the big drivers out here.”

Indeed is certainly not alone in establishing an engineering center in Seattle. Just this week, we reported on Pinterest setting up shop in Seattle, the latest in an ongoing trend of large tech titans who’ve crashed upon the shores of Puget Sound. In fact, GeekWire tracks all of the engineering offices from out-of-town companies, a list that has swelled to more than 80 in recent months.

Indeed has a taken a slightly different approach to its engineering office growth, centering it around key product initiatives. For example, the company’s Indeed Resume product — launched about five years ago to allow job seekers to upload resumes to the search engine —is completely owned and developed by the Seattle team.

“We tend to have all of our product teams sit together and work together,” said Hyams, adding that the company’s data science team — which analyzes how people are using Indeed.com and its mobile properties — also is based in Seattle. That team provides critical on the recommendation engine for potential job candidates.

At 3,000 employees worldwide, Hyams said that Indeed is small enough to remain innovative with engineers holding huge amounts of autonomy on the projects they work on. It is not like at larger companies where new engineers get to work on the “corner of a pixel of a widget,” he said. Indeed is owned by Japan-based Recruit Holdings, which acquired the job site in 2012. 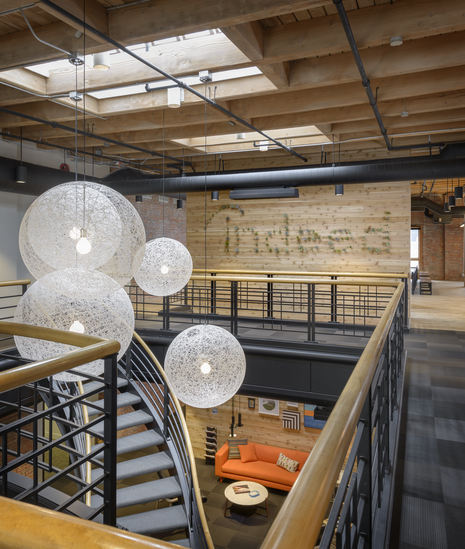 Even with the growth in Seattle, Indeed is set in terms of its office space, with room at 1008 Western Ave. for the next couple of years. It moved into that space 17 months ago. But given the nearly 60 percent annual revenue growth at the company, Hyams said they’ll likely be on the prowl for more space by 2018.

Currently, 84 recent college graduates are participating in the program in Austin, with 17 of those slated to return to Seattle in early November to start working for the company.

Hyams said the program allows Indeed to tap budding talent, while also pushing the company to remain innovative. In fact, one of the company’s new innovations — the Job Spotter mobile app that allows individuals to be rewarded for uploading job openings they see posted in the physical world — emerged from the program last year and now has already achieved more than 100,000 downloads.

A hundred years ago, companies would establish in a location and people would move to Detroit, because that is where the work was. I think that in 2016, companies go to where the talent is.

Hyams is hoping even more innovative offerings come out of the program this year, with some of those engineers bringing the ideas back to Seattle, a city he says is ripe with innovative thinkers who don’t get lost in the hype.

In that way, Hyams sees Seattle a lot like Austin.

“Spiritually, there is a lot of connection between Austin and Seattle in terms of the way people feel about both places. One part of it is that we are not San Francisco. So, if you are in tech there is the ‘you are either in the Bay, or you are not.’ And I know in Austin we have a lot of pride in how we do things, and we maybe don’t get the same kind of mind share from other people, but certainly at Indeed and Austin as a whole, and I think Seattle is pretty similar, I think we are really focused on trying to build a great company and we don’t care so much about the hype. I think there is a lot of hype that goes on in the Bay Area, and we have been plugging away for 12 years at building a great company, and lots of other companies have come and gone and gotten lots of attention for doing things that might seem splashier, but we are really focused on a single mission, which is we help people get jobs, and that’s how we measure our success.”