The symbolism adds a sense of tradition to Blue Origin’s 21st-century mission of getting millions of people living and working in space.

So far, the company has conducted five fully successful test flights of its New Shepard suborbital rocket ship, and it’s working on an orbital rocket as well as a super-rocket designed to carry people and payloads beyond Earth orbit.

During last weekend’s Pathfinder Awards banquet at Seattle’s Museum of Flight, Bezos provided a guide to Blue Origin symbology, which we’re supplementing here with some extra bits of background. Before you know it, you’ll be shouting “Gradatim Ferociter” like a pro (preferably as you brandish a Lady Vivamus sword).

What’s Blue Origin’s motto? “Gradatim Ferociter” is Latin for “Step by Step, Ferociously.” Bezos says that’s his approach to spaceflight. “If you’re building a flying vehicle, you can’t cut any corners. If you do, it’s going to be [just] an illusion that it’s going to make it faster. … You have to do it step by step, but you do want to do it ferociously.”

Why is there a winged hourglass on Blue Origin’s coat of arms? Bezos says that’s “a Victorian cemetery symbol which means ‘time is fleeting.’ We don’t have forever.”

Why is Blue Origin’s mascot a tortoise? The lesson from the fable of the hare and the tortoise is that “slow and steady wins the race.” Bezos puts a different twist on the tale: “Slow is smooth, and smooth is fast.” The mascot also may be a commentary on other commercial space ventures that leap into aggressive schedules but don’t end up meeting them, like the hare in the fable. After each successful New Shepard flight, Blue Origin’s team paints a tortoise on the capsule’s hatch. And during last weekend’s banquet, Bezos showed off a pair of tortoise cufflinks (which you can buy on Etsy for $48).

What’s the meaning of the numbers on the shield in the coat of arms? Those correspond to the velocities required to reach various altitudes. A suborbital rocket might achieve a velocity of 3 kilometers per second, for example, but it would take somewhere around 9.5 km/s to reach Earth orbit. Escaping Earth orbit and heading for other celestial destinations would require even higher velocities. (Also notice the rocket taking off from Blue Origin’s West Texas launch site.) 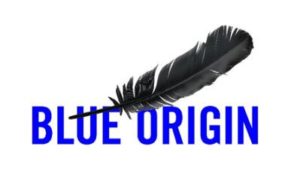 What’s the meaning of Blue Origin’s feather logo? “The feather is simple,” Bezos said. “It’s just a symbol of the perfection of flight. For thousands of years, we humans have been looking up at the birds, and wondering what it would be like to fly. … I think it’s representative of freedom and exploration and mobility and progress. For the people who are in love with flight, there is no substitute.” Blue Origin employees can sometimes be seen wearing silver feather lapel pins (flown in space, of course!).

What’s the meaning of New Shepard’s name? Blue Origin’s suborbital rocket is named after Alan Shepard, who became the first NASA astronaut to take a suborbital trip to space in 1961. The company’s orbital rocket will be named New Glenn, which pays tribute to John Glenn, the first American in orbit. And the first human to walk on the moon, Neil Armstrong, provides the inspiration for New Armstrong, the super-rocket that Blue Origin is developing to send payloads beyond Earth orbit.

Reflecting on an incredible day. Toasting all 800 of the passionate, brilliant folks at Blue Origin. #InFlightEscape #GradatimFerociter pic.twitter.com/KHJMYHvPud

And the boots? After this month’s successful test flight of the New Shepard rocket ship, Bezos tweeted a picture that showed him with a drink in his hand, putting his feet up by the fire in West Texas. He was wearing a pair of cowboy boots emblazoned with the “Gradatim Ferociter” motto. At the banquet, emcee Steve Taylor asked whether Amazon was selling those branded boots. “No, but that’s a damn good idea,” Bezos said with a laugh. “We should think about that.”