IBM and Microsoft were the most active tech acquirers, IPO activity is down, and unicorn exits are now exceeding unicorn births.

Those are some of the data points from CB Insights’ Global Tech Exits Report for the first half of 2016. 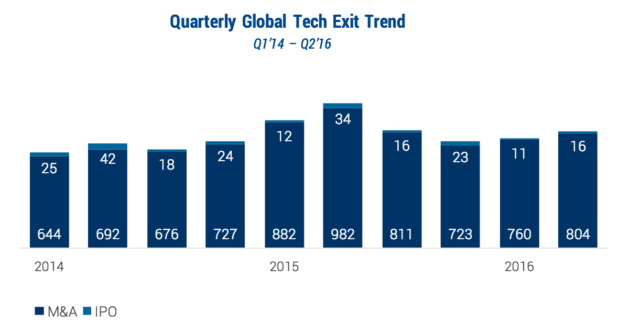 Top U.S. states for tech exits in the first half of 2016 were California, New York, and Texas.

IBM and Microsoft were the most active acquirers in the first half of 2016. IBM swooped up companies like Ustream, Resilient, and Optevia; Microsoft bought Xamarin, Wand Labs, and SwiftKey, among others.

SV Angel has had the most tech exits this year for VC firms, with Lerer Hippeau Ventures and Bessemer Venture Partners behind. For best-performing corporate VC firms, Intel Capital leads the way this year so far with the most exits, followed by Google Ventures and Salesforce Ventures.

Check out the full report here.