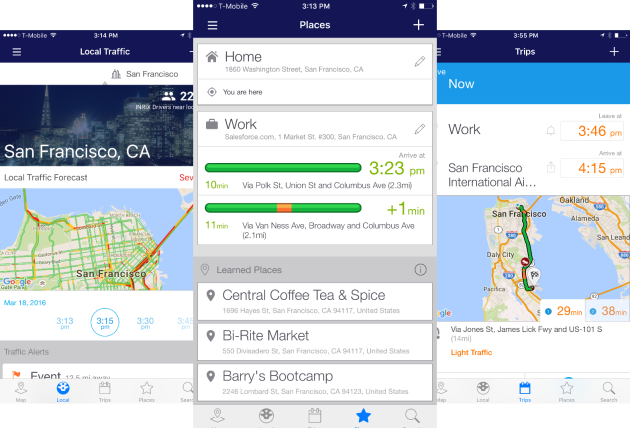 While smartphone navigation apps are great for learning how to get to new places, they’ve never been that smart about leading you along familiar routes.

But if things are jammed up along your usual route, it can be helpful to know before you leave that taking backstreets may be faster.

Today’s update to INRIX Traffic brings powerful smarts and turn-by-turn directions to the smartphone app. This is the first consumer product to take advantage of the Autotelligent platform from INRIX, a Kirkland-based analytics firm that tracks connected cars and leverages big data for deep traffic insights.

The app doesn’t just monitor traffic on the way to a destination, but learns which routes you take, to which destinations, and when you take them. With the update, INRIX — which spun out of Microsoft Research in 2005 and is backed by Porsche and others — is leap-frogging Google-owned Waze, which just added smart alerts based on your calendar earlier this month.

By building up that profile, INRIX is able to do all kinds of neat things.

The most obvious benefit: By leveraging data from its Autotelligent system — which includes official sources like weather and traffic services, INRIX’s network of connected vehicles and other drivers — the app is able to monitor conditions and let you know when to leave to get to work on time.

And if you always head to the gym on Tuesday mornings, it’ll learn that too and so you’re not getting alerts just as you hit the shower that it’s time to leave for work.

But it also learns which routes you take. So even if taking the highway may be more efficient, INRIX Traffic knows you usually like to go on the side streets so you don’t have to deal with the relentless stop-and-go. So when it suggests a time to leave, you know it’s basing that off your regular route and not necessarily the most efficient one.

The real benefit of INRIX’s system over something like Waze is it’s ability to learn about the driver, building a profile without the driver having to do any tedious data entry.

Instead of typing in addresses for your usual stops, INRIX automatically remembers them. While users can approve, edit and add locations, the app is smart enough to learn them from your habits.

INRIX still makes most of its revenue by selling data to transportation departments, billboard owners and other third parties. While the data from INRIX Traffic will feed into those products, it’s fully anonymized just like data from connected cars and other INRIX products. And since it isn’t making money from this app, that means there are no distracting ads or “suggested” stops popping up and distracting you from your drive.

INRIX Traffic is available for free today for iOS and Android.

Previously on GeekWire: Generation App: Is Waze a life-saver or public menace? Why the driving app is so polarizing