Hate tying your shoelaces? Nike has you covered.

The shoe giant today unveiled the Nike Hyperadapt 1.0, its first self-lacing sneaker that is available to the general public.

“Innovation at Nike is not about dreaming of tomorrow. It’s about accelerating toward it,” longtime Nike designer Tinker Hatfield said. “We’re able to anticipate the needs of athletes because we know them better than anybody. Sometimes, we deliver a reality before others have even begun to imagine it.”

The shoe features sensors in the heel that detect your foot, signaling the shoe to tighten. Two buttons on each side allow you to tighten and loosen the fit as needed.

Wow! Thanks @Nike for letting me be the first athlete trying the new HyperAdapt 1.0 #nike2016 #nikeinnovation pic.twitter.com/RVWZgJjkqf

Nike’s new “adaptive technology” first debuted this past October, when it showed off the 2015 Nike Air Mag that had the self-lacing feature. Those kicks were only available in limited quantity via auction, with proceeds going to the Michael J. Fox Foundation for Parkinson’s Research.

The Hyperadapt, though, will go on sale to members on the Nike+ platform this holiday season in three colors. 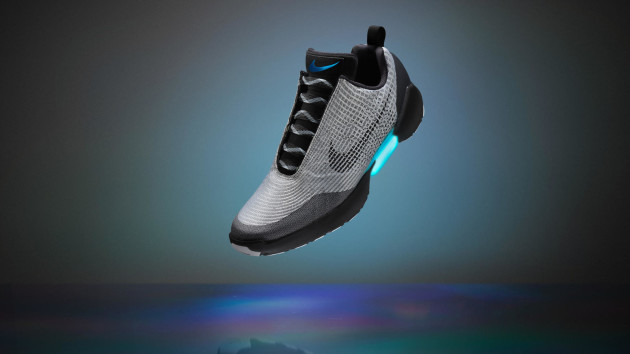 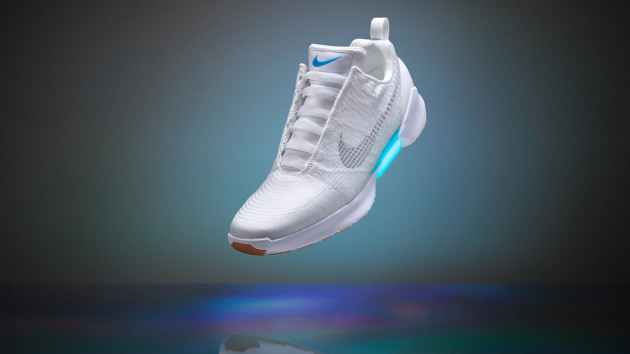 The longer-term vision is to have a shoe that automatically tightens or loosens, depending on what activity a person may be doing.

“Wouldn’t it be great if a shoe, in the future, could sense when you needed to have it tighter or looser? Could it take you even tighter than you’d normally go if it senses you really need extra snugness in a quick maneuver?” Hatfield said. “That’s where we’re headed. In the future, product will come alive.”

Other companies big and small are testing their own self-lacing technologies, but Nike certainly has the resources and customer base to push these new products into the mainstream.

Nike has always prided itself on innovation and that was evident when Nike COO Eric Sprunk joined us on stage at the GeekWire Summit this past September. Sprunk explained how it’s possible that customers will be able to download a file for a shoe and manufacture their new kicks at home with a 3D printer.

“Do I envision a future where we might still own the file from an IP perspective — you can’t just have anyone making a Nike product — and have it manufactured in your own home or we do it for you at our store?” Sprunk said. “Yeah, that’s not that far away.”