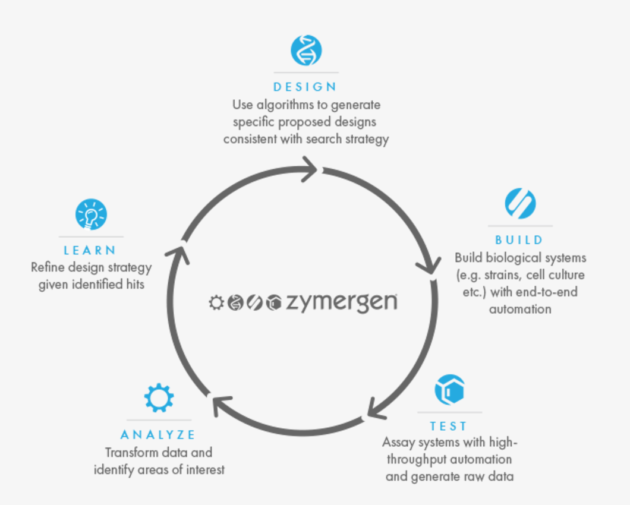 Zymergen, a biological engineering startup based in the San Francisco area, is building out an engineering center in Seattle, GeekWire has learned.

A Zymergen spokesperson confirmed that the company’s Seattle office, located in the World Trade Center downtown,  opened Tuesday. Three employees are already based in the space, and the company is actively hiring engineers to build out the office.

The company picked Seattle for the engineering office because it is a data science and software engineering hub, two areas that are core to Zymergen’s business, the spokeswoman said. The office will initially be focused on engineering.

Zymergen engineers a variety of chemicals and molecules that do not naturally occur, for use in industries from agriculture to electronics. The company uses microbes to custom design materials, much like the metamaterials being developed in Bellevue’s Intellectual Science Fund at Intellectual Ventures.

Zymergen leverages data science and software to manufacture these particles more effectively than traditional approaches, according to its website.

“Our comprehensive approach brings together technology, automation, and biology with the most sophisticated capabilities in each,” the company’s website says. “As a result, we deliver better economics for current products, help customers bring new products to market faster, and develop novel products the world has not yet seen.”

Zymergen’s expansion follows a $130 million Series B round in early October, reported by The New York Times. The round was led by Japanese telecommunications company SoftBank, and coincided with the addition of SoftBank exec Deep Nishar and former secretary of energy Steven Chu as Zymergen directors.

The company is led by CEO Joshua Hoffman, a McKinsey & Company veteran who previously served as a partner at Norcob Capital. The CTO is Aaron Kimball, a University of Washington computer science grad who previously worked at Cloudera and WibiData.