Seattle’s South Lake Union neighborhood has become a microcosm of the changes and challenges the city faces. Many see it as the symbol of the housing affordability crisis, as Amazon draws large numbers of highly-paid tech workers to its dense urban campus.

But new stats from Seattle real estate database, Zillow, tell a more complicated story. According to a report by Zillow Senior Economist Aaron Terrazas, 53.4 percent of tech employees working in South Lake Union live outside of the city proper. And while those residents may contribute to the city’s traffic woes, they aren’t directly driving rents up.

South Lake Union tech workers that do live in Seattle are mostly clustered in Belltown, Queen Anne, and Capitol Hill, according to the study. Younger employees in this cohort are more likely to live within the city limits.

In contrast with the Zillow study, Amazon says more than 70 percent of its employees in the region live in the city of Seattle, and more than 55 percent commute to work in ways other than driving, including 20 percent who walk to work. 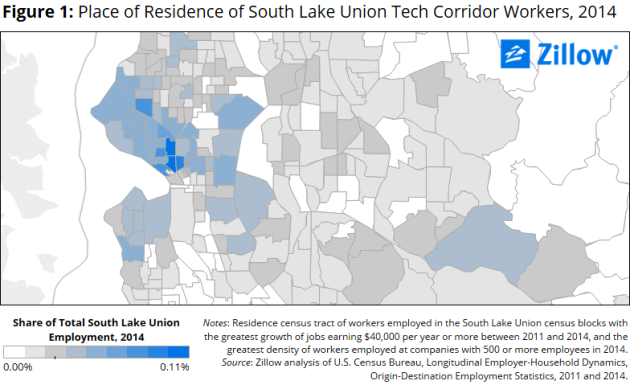 “These data show that rents have increased more in the King County neighborhoods where South Lake Union Tech Corridor workers tend to live,” writes Terrazas. “Rising demand has contributed to rising prices, and new supply has struggled to keep up. But the association between job growth in South Lake Union and rising rents across the city is not necessarily as tight as might be expected; there are many other factors driving Seattle area rents as well.”

Those factors, he says, include high costs of building new homes in the city, the higher rents of newer apartment buildings, and Seattle’s relative affordability compared to other tech hubs. Just as Amazon draws transplants by adding jobs, that lower cost of living attracts tech workers and companies hoping to escape expensive regions like the Bay Area.

Still, rents in parts of the city where South Lake Union tech workers cluster have seen a statistically significant increase. In the neighborhoods with the highest concentration of these workers, median rents rose roughly $0.60 per square foot between 2011 and 2015. For comparison, regions with the lowest density of this cohort increased $0.38 per square foot. 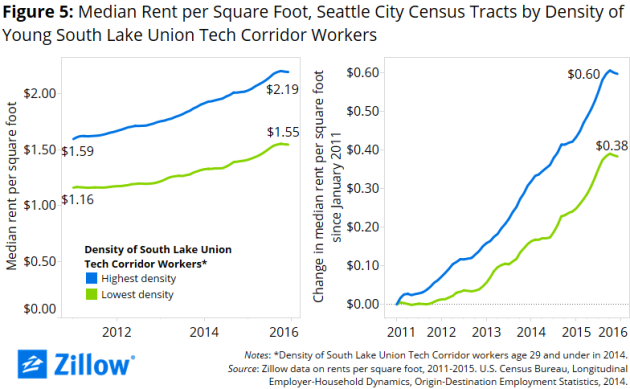 “The technology industry – alongside other highly skilled and comparatively highly paid industries such as healthcare and advanced manufacturing – has been expanding in other neighborhoods too, notably in Pioneer Square, Fremont, and Capitol Hill,” notes Terrazas. “But for many, South Lake Union has become emblematic of the broader economic forces shaping Seattle.”