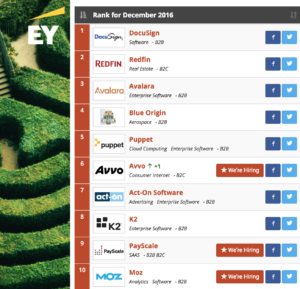 It wasn’t a banner year for IPOs in 2016 — the number of companies that went public nationally this year is down 38 percent compared to last year, per Renaissance Capital — meaning there wasn’t much room for movement at the top of the GeekWire 200 list of the top privately-held Pacific Northwest startups this year.

PhaseRx kicked things off this year, going public in May. RFID chip maker Impinj then filed for its IPO and went public in August. That was followed by enterprise software company Apptio, a top five company on the list at the time of its IPO in September.

Will 2017 be a big year for IPOs, or are the region’s top startups happy where they’re at? At least a couple of top companies on the GeekWire 200 are thinking about going public. After raising $96 million earlier this year, Sales tax automation company Avalara, number three on the list, hinted at the possibility of an IPO in the future, but didn’t commit to anything. The number 24 company on the list, dog-sitting platform Rover, may be gearing up for an IPO. We know at least one top company on the list, DocuSign, is not in a hurry to go public.

Future IPOs could help shake up the top five, which remained static this month with DocuSign at the top, followed by Redfin, Avalara, Blue Origin and Puppet. The only movement in the top 10 saw Avvo continue its journey toward the top five, jumping Act-On Software to land in the sixth spot.

Click for the full December update to the GeekWire 200 and continue reading for highlights.

Boatbound, which we have referred to in the past as the “Airbnb for boats,” moved its headquarters to Seattle from San Francisco in March and made its debut on the GeekWire 200 last month. It was one of the biggest movers this month, climbing 20 spots to number 159.

Boatbound chose Seattle because it was a more affordable place to run a business and live than the Bay Area. And that has allowed Boatbound to grow quickly. The company has more than doubled its headcount since moving to Seattle from 11 in March to 23, according to its employee count on LinkedIn.

According to its website, approximately 15,200 boats are registered for rental in 2,100 cities around the world. GeekWire tried out the service in 2014 — well before my time and before Boatbound moved here — and got to see Paul Allen’s floating helipad.

With the recent news of Russia’s involvement in the U.S. presidential election and the disclosure of a second massive Yahoo breach, it’s no surprise that cybersecurity is at the top of peoples’ minds right now. Centri Technology, a Seattle-based startup that focuses on security for the Internet of Things, could benefit from this mindset and was the biggest riser this month, up 23 spots to number 174.

Centri last month joined the Industrial Internet Consortium, a group of companies that promotes and advances security for IoT, and added three new employees, bring its total to 29, according to the company’s LinkedIn employee count.

Spare5, one of GeekWire’s App of the Year finalists in 2016, appears on the cusp of growing rapidly in 2017. It rose 15 spots to number 179 on the GeekWire 200 list. The 32-person company is hiring for 10 more positions from a variety of disciplines.

The first startup born out of the Madrona Venture Labs incubator, Spare5 combines a fleet of humans performing short tasks on their smartphone — like photo tagging, price guessing, and simple surveys — with machine learning to help companies make sense of unstructured data. Among the Seattle startup’s biggest customers are IBM, Expedia and Getty Images.

Four companies made their debut on the list this month: Qorus, Azuqua, OneEnergy Renewables and Hubb.