A few years ago, Aaron Hall realized that the cost of running a business and living in the Bay Area was increasing at a high rate. His solution? Move the startup to Seattle.

And that’s exactly what happened to Boatbound, a four-year-old startup that hosts a marketplace for boat rentals.

The 11-person company relocated its headquarters from San Francisco to Seattle a few months ago. Hall told GeekWire today that though Silicon Valley is “still a great place to be,” it simply became too expensive to live and work there.

“With all those costs, we were getting to a point where we started evaluating better places to be,” he said.

Behind South Florida, the Seattle market is Boatbound’s second-most-popular city. That, combined with the technical talent available in Seattle, made the decision to move north fairly easy.

“For us, outside of being a great boating market, Seattle is almost as comparable to San Francisco with being able to recruit talented people,” Hall noted. “It has a booming tech scene that’s growing like crazy. And it feels a lot cleaner than San Francisco — maybe the rain washes all the dirt away.”

There are couple other differences Hall has noticed thus far with Seattle, too.

It has a booming tech scene that’s growing like crazy. And it feels a lot cleaner than San Francisco — maybe the rain washes all the dirt away.

“There is a really diverse culture here,” he said. “San Francisco is becoming more one-sided — it’s a great place to be, but if you aren’t in tech, it’s a challenge to be there. The cost of living is the No. 1 reason why companies like us and others are re-evaluating being there.”

Boatbound is currently working out of the WeWork building in South Lake Union, but wants to eventually move into a more permanent location as its busy summer season approaches.

The company is very much like Airbnb, but for boat rentals. Its premise is simple: Owners put their boats up on the Boatbound marketplace; interested renters pay to use the boats for either a half day or full day. Both the buyer and seller benefit — an owner makes money when his property would otherwise sit idle, and renters get to enjoy a day on the water without having to purchase a boat. 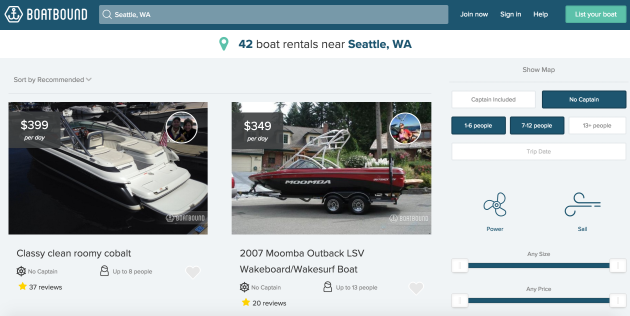 The company, which has raised $4.5 million, has processed $25 million in booking requests in more than 2,500 cities across the U.S., with 12,000-plus boats listed on the platform to date — everything from a 6-person Bayliner to a 37-foot French cruiser. Hall noted that building a marketplace is tough, but he said that boat owners and renters have wanted something like Boatbound for a while.

“The community is what drives us,” he said.

Hall added that the Seattle boating community specifically has liked having a service like Boatbound.

“The culture up here is really built around boating,” he said. “As it warms up, the lake fills up and people get on the water — it’s pretty special.”