The Pacific Northwest is one of the most creative and vibrant places on the planet, a mossy-covered corner of the world where remarkable innovations and world-changing businesses take root.

On May 12th, we’ll once again recognize the iconoclasts, innovators and disruptors of the Northwest technology industry as we host the annual GeekWire Awards. Early-bird tickets available here. 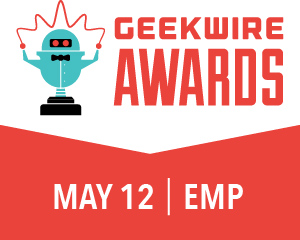 Now in its eighth year, the GeekWire Awards — originally started by entrepreneur Marcelo Calbucci — truly represent a community-wide effort. We’ll start today by accepting nominations in 13 categories — ranging from old standbys such as Startup of the Year and Next Tech Titan to more recent additions such as Geekiest Office Space and Newcomer of the Year. (See nomination form below).

Until April 7th, we’ll take nominations in the 13 categories, with anyone in the Pacific Northwest community (Oregon, Idaho, Washington and British Columbia) able to nominate worthy candidates. From that list, we’ll work with our illustrious judging panel — including venture capitalists, CEOs, lawyers and others — to winnow our list to five nominees in each category. Then, beginning on April 18th, we’ll start community voting on GeekWire, with readers selecting the very best in each of the categories. The winners will be revealed May 12th at the GeekWire Awards party, taking place once again at the EMP Museum in Seattle.

But first things first, now is your time to start the nomination process. Take a look at the categories below, and nominate those who you think are worthy, choosing entrepreneurs, products and companies that truly are changing the way we live, work and play.

Note: One nomination is as good as 20, so no need to flood the ballot box at this time. That will come later when we open the voting up to the community in each of the 13 categories.

Also, just as a reminder, the GeekWire Awards is one of our most popular events. It will likely sell out, so make sure to grab tickets here before early-bird prices end.

A big thanks to Wave for sponsoring the 2016 GeekWire Awards, and for each of the individual category sponsors who help make this event possible. Gold and silver sponsors include: Perkins Coie, OfferUp, WSGR, Knoll, First Tech Federal Credit Union, EY, Avanade, UPS, Moz and RealSelf.

If interested in sponsoring other aspects of the GeekWire Awards, please contact GeekWire’s Daniel Rossi at 206-423-9196 or daniel@geekwire.com or Adam Rubens at 425-753-1506 or adam@geekwire.com.

We’re getting excited for the Awards, where we’ll premiere another motion graphics video with our partners at Killer Infographics, and just have a good old fashioned time celebrating the best of the innovation economy in the Northwest.