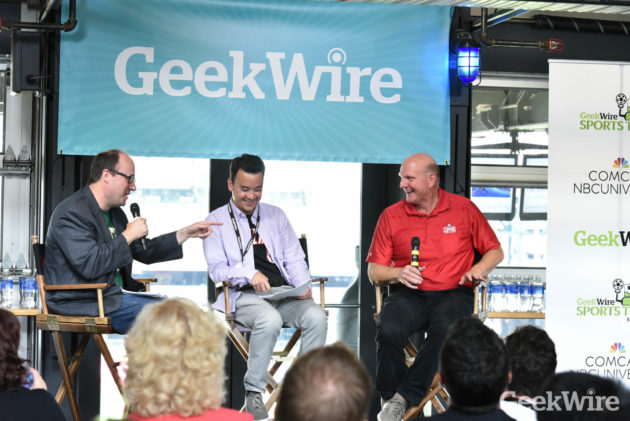 Steve Ballmer, the L.A. Clippers owner and former Microsoft CEO, brought his trademark energy and enthusiasm to the GeekWire Sports Tech Summit today in Seattle — discussing one of his favorite topics, the intersection of technology and sports.

Watch the full video below, and continue reading for a few highlights. Also see our coverage of Ballmer’s comments on the NBA in Seattle, why the kiss cam still trumps technology, and the potential to transform the fan experience.

On his long-term ambitions for the L.A. Clippers’ streaming experience: “There’s a lot of things you can talk about. ‘Oh, that’ll be cool.’ How do you let fans customize the experience — their perspective, their camera angles, how do you let them sit center court, if they want to sit center court as opposed to the standard angle with which the game is watched. What will really resonate and how do we get there — how do we get there at a price, frankly, that’s cost effective. Will some fans pay more for a premium experience?”

On current broadcast deals: “There’s no capitalism working right now in sports (related to broadcast rights). Teams sign these rights agreements that go for a long period of time, and nobody actually has any incentive to work on them. The team has no incentive because the money is going to be the same in any event. The broadcaster has a long-term contract with the cable company. They have no incentive to work harder. And the cable company, they’re just basically taking a bundle of stuff and sticking it out there for the fan. So how does capitalism help focus people on new opportunities.”

On the key performance indicators he looks at in his role as an NBA owner: “What is the most important KPI? Wins! That’s so easy! … Thank you all very much, let’s go home, it’s been a pleasure talking today.”

On the future of sports on Twitter, a company in which he has a significant stake: “I think real-time information is as valuable and interesting as anything you’re going to find. What do sports analytics departments use — the number one source during the draft? Twitter. Literally in our draft room you have big TVs with Twitter feeds that guys have set up, because that’s the best way to get real-time data. The Twitter feeds of certain reporters are actually quite important in sports. This notion of real-time information, which clearly Twitter leads, I think will play a very, very big role. The notion of broadcasting things, video that is interesting to you, Twitter has great assets.”

On technology in the arena: “Our coach (Doc Rivers) hates phones right now. Hates em, in the arena, because it takes people from being in the game and cheering and supporting our guys to (looking down at their phones). We want fans helping us win ballgames! I’m not saying people shouldn’t bring their screens in and do their thing, but what you really want to do is have the experience enough integrated that it’s not 50 percent of the time the fan is distracted. … We are trying to put together an experience that’s entertaining enough that we can keep the fan riveted to what’s going on on the court.”

His advice to people in sports and technology: “Walk through every position, every role in the sports word, and ask the problem not of what tech can do for them, but what do they want and then where does tech fit in. … This was an issue at Microsoft, it’s an issue generally in the tech world. Things come tech out, which isn’t bad. But after the first wave of tech out, then it has to go customer scenario in. I don’t think people are asking themselves enough, what is it that the trainer really cares about and how do you use this impressive innovation to help the trainer, to help the athlete, to help the video man, to help the analytics guy, to help the coach. … I think if people walk through that, that’s how you’re going to wind up with solutions that really make a difference.”

See above for the full video of Steve Ballmer at the GeekWire Sports Tech Summit.