Facebook is testing a way to move your SMS messages into its own Messenger app, allowing users to access texts from within the company’s popular messaging app. Reports of this integration surfaced this past February and I’ve been testing the feature for the past few days.

So far, I like it, and if it catches on with millions of other people that use both SMS and Messenger, it could be huge for Facebook — particularly with its plan to grow Messenger into a remote control for our digital lives.

The integration, which can be turned on and off, is rather simple, bringing your SMS messages into Messenger. I prefer the speed and functionality of Messenger over the stock text messaging app on my Galaxy S7, so it’s nice having all my text conversations in one place. Plus, I like using Messenger features — like sending stickers or recording voice messages or sharing my location — for my text messages.

A Facebook spokesperson confirmed with GeekWire that the company is testing this integration with a “small number of Android users.” It’s unclear how this feature would work with iOS and iMessage.

Here’s a statement from Facebook — it’s essentially the same information the company shared with folks back in February:

“At Messenger we are always trying to create new ways for people to communicate seamlessly with everyone. Right now, we’re testing the ability for people to easily bring all their conversations – from SMS and Messenger – to one place. It’s a really simple way to get, see and respond to all your SMS messages in just one app. By choosing to access your SMS messages in Messenger, they’re right alongside all the other enhanced features that Messenger offers.” 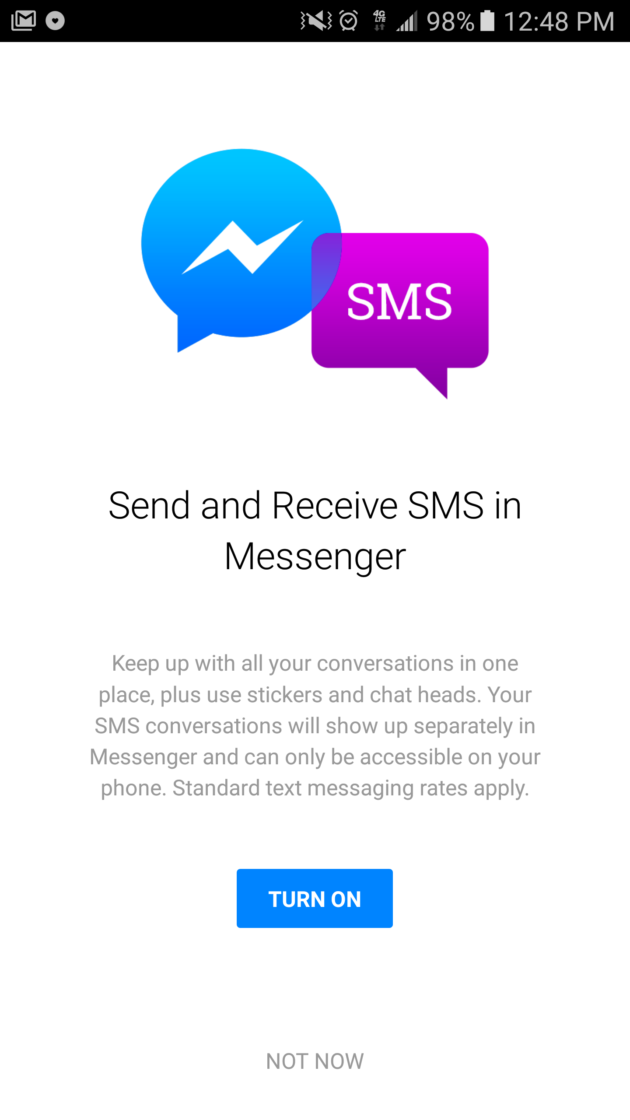 Facebook actually had an SMS integration with Messenger a few years ago, but pulled that functionality due to “low traction.” Still, the company has made a variety of moves to move people away from contacting each other via stock messaging apps and instead on its own platform.

“By building in rich media features like photos, stickers, GIFs, payments, apps, location, and transportation, Messenger has tried to convince people to ditch SMS, which does none of those gracefully,” noted TechCrunch’s Josh Constine in a story published in January that outlined Facebook’s plans for Messenger.

Given how many people send and receive texts via their stock messaging apps, the SMS integration could be a crucial move for Facebook as the social media giant looks to turn Messenger into a platform for communication not just with friends, but businesses, too. For Facebook, the more time people spend on Messenger — which now counts 900 million monthly active users — the better.