It now extends to the venture capital community. So, here’s the key question: Where are you better off raising cash?

A new report from PitchBook Data helps to put this question to rest. It’s the West Coast, baby!

Five metro areas along the West Coast — Los Angeles, San Diego, San Francisco, San Jose and Seattle — have accounted for more than half of all venture capital invested into U.S. startups since 2010. Of the $346.5 billion invested in the U.S. during that time period, $183.8 billion was invested in those five West Coast cities.

Seattle-based Pitchbook, which also looked at venture funds raised, “unicorn companies” and the total exit value of venture-backed companies, noted that “the West Coast offers the most fertile tech ecosystems for both nascent startups and Fortune 500 giants.”

The report also dug deeply into each of the major tech hubs, with Seattle ranking 6th just behind New York, L.A. and Boston. As GeekWire readers know, a few spirited debates have popped up in recent weeks around which tech hubs hold the most promise, especially after New York venture capitalist Fred Wilson called Seattle a “third tier” startup city, putting Seattle in the same bucket as Atlanta, Chicago and Austin.

A number of prominent Seattle techies fired back, pointing to some of the big-name tech companies that anchor the city’s ecosystem.

When it comes to venture capital invested, Seattle ranked #7 with $8.4 billion raised since 2010. It ranked #10 in terms of total exit value of venture-backed companies, with $6.7 billion worth of exits since 2010. That ranking led Pitchbook to postulate that things may be stalling a bit in Seattle. Last year, there was a 28 percent decline in number of exits and a 71 percent drop in total exit value.

So, Seattle better get some big wins — not only on the sports field — but in the business community if it wants to hold onto its position.

Here’s a cool chart that Pitchbook put together, with an explanation of the methodology below. 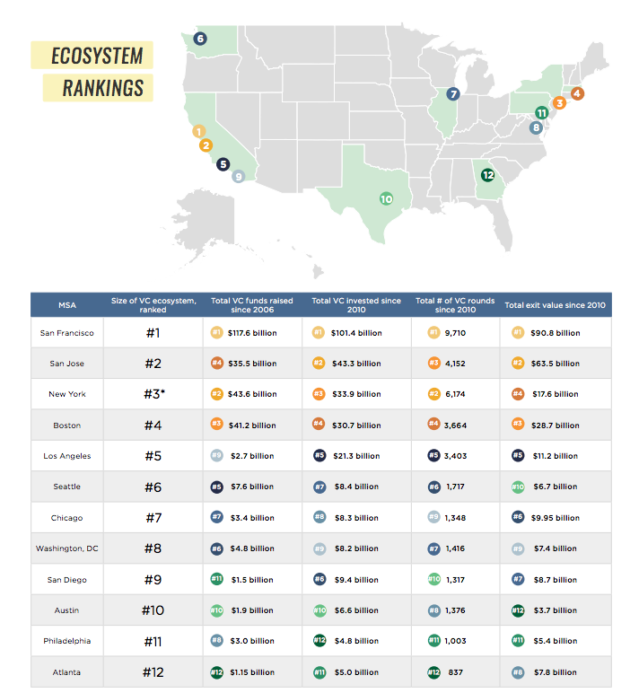 This ranking was generated by weighting capital raised, VC invested, VC activity and venture-backed exit value equally, tallying up their ranking in each area, then summing and sorting from lowest to highest, with a lower score indicating a larger ecosystem. Is this definitive? Hardly— you can quibble over which metric is more representative of an ecosystem’s size, or point to additional factors that are not included. But hopefully this table will provide food for thought as you go on to explore each MSA in detail in the pages below.