GeekWire Startup Day champ Slope, a Seattle-based company that makes software to help teams manage and collaborate on multimedia content, said it has completed a $1 million seed round, led by Second Avenue Partners.

Pete Higgins, partner at Second Avenue, will join Slope’s board as a result of the investment. Slope plans to hire two senior engineers to build out its product. Today, Slope has a staff of seven.

Slope’s content management software became available to the public Monday, starting at $30 a month per user. The company has been beta testing its product for the last nine months or so. During that time, it has signed up more than 3,500 customers for its waitlist. Current paying customers include Microsoft, Title Source, and Scalr.

In the old days, businesses used to outsource much of their creative content to ad agencies and other firms. But increasingly, big companies and even some smaller ones produce their multimedia content — videos, graphics, etc. — in-house. But the tools to manage and work on those projects are lacking, say Slope’s founders Brian Bosché and Dan Bloom.

“(Businesses) still use the same tools they tried to use when writing blog posts or putting together PowerPoint presentations, where it’s still largely email, spreadsheets, internal server file-sharing,” Bosché said. “You have this new challenge and this new problem with businesses trying to become content producers themselves.” 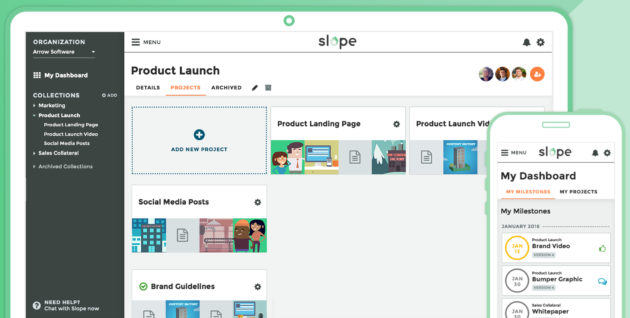 Three years ago, Bosché and Bloom founded Slope as a creative agency in Detroit. Neither came in with a technology background, but they both participated in the Venture for America program, which places young entrepreneurial people at startups and early stage companies in cities in need of revitalization. Bosché and Bloom hit it off during the program’s training camp and re-connected after completing the program. But after working on numerous video and multimedia campaigns, they became frustrated by inefficiencies in creative marketing collaboration, so they decided to build a platform that streamlined the process.

“After working with hundreds of clients as a creative agency, we realized how difficult it is for businesses to collaborate on video, designs, images, and other creative content; so we decided to solve the problem ourselves – that’s how Slope was born,” Bloom said.

After changing direction, Slope moved to Seattle to participate in the Microsoft Ventures Accelerator program, and in March 2015 the company raised a $420,000 angel round. After that the company began beta testing in anticipation of its public launch.

“It’s a lots of little things,” Bosché said of the improvements made to the product during testing. “For us, it wasn’t really any huge thing that we got advice from, it was just constant refinement over months of working with customers really closely.”