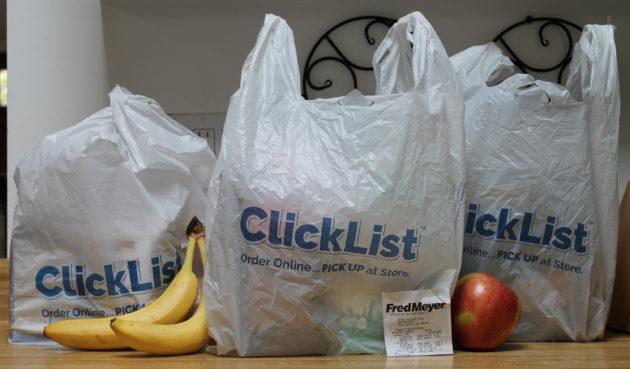 I have been the principal grocery shopper in my household for years, but that doesn’t stop me from aimlessly and inefficiently wandering the aisles looking for all of my favorite products, mostly Pop-Tarts, beer and cookies. I often skip the big grocery trip all together because it takes too long, and I’m busy, so instead I go several times a week for a couple of items.

So when we at GeekWire broke the news that a drive up grocery is planned in Seattle’s Ballard neighborhood, and Amazon is likely behind it, I was pretty psyched. As one commenter in that story pointed out, this concept exists already at Walmart. But that’s not the only store doing curbside pickup. Turns out my preferred store, Fred Meyer, does it too. So obviously I had to try it out.

The service is called ClickList, and Fred Meyer’s parent company Kroger launched the concept in late 2014. Stores charge $5 per order to pick, pack and bring groceries out to the car, with no charge for the first three orders.

In Washington, the service is available at stores in Federal Way, Puyallup, Longview, Bellingham and Vancouver. So far, it is not available in any Seattle stores. The service is expanding, according to the Tacoma News Tribune, to stores in Port Orchard and Redondo later this year.

Here’s how the service works: First go online and select items from a list that includes prior purchases, if you have a Fred Meyer account like I do. Otherwise, search for products on the site, which claims to have more than 40,000 items, including fresh produce and meat. Choose a one-hour pickup window, finalize the order and you are ready to go. One catch though: same-day pick up was not available, so make sure to plan ahead.

When I got to the store ClickList branded signs pointed me to reserved pick up parking spaces. Then I called a phone number listed on the signs in the parking lot, telling the employees I had arrived. A few minutes later an employee carted out my groceries in bags. I was hoping for a little red wagon, but what can you do? The employee used an iPad with a credit card reader attached to take payment and then sent me on my way.

The employee who brought out my groceries said the program is pretty popular at that store, and when I showed up around 8 p.m., about 25 people had used it that day. No one else was parked in a pick up spot when I arrived.

In lieu of a super in-depth analysis, I am going to run through a pro-con list of the service, which I tried out Tuesday with my lovely wife Megan.

Convenience of ordering: Search, click, pick a quantity, add to cart. That’s pretty simple. The site also has an option for notes on any item, so if you want a steak bigger than your head, you can ask for one. No guarantees though. It also means I can look in my refrigerator as I order, which is great because I never know what we have. Sometimes, the fridge is 85 percent apple juice, and it’s all because I am too lazy to check on what we have before going to the store.

Remembers past orders: A solid 75 percent of stuff I bring home from the store I buy every single week. ClickList speeds up the process tremendously, as it removes the need to search for items I purchase frequently. It may also serve as motivation to eat a little better. If suggested options come from frozen meals and the chips and candy aisles, that’s not a good sign.

Easier experience saves time: Let’s face it, going to the grocery store is hard. I have to get off the couch, get in my car and then figure out how to feed myself when I could be sitting at home in pajamas watching Chopped. All that takes time. For someone with actual responsibilities, like children, ordering at home makes it easier to multi-task. After completing my list, I felt as though I’d accomplished something by ordering groceries and put off actually getting them until later. Let future Nat deal with that one!

Skip the checkout line: I have an innate ability to always pick the worst line. There could be two lines, one with a single person buying a pack of gum and the other with the entire Seattle Seahawks offensive line buying a month’s worth of sustenance, and if I get in the gum line something will inevitably break while the linemen, and all the people behind them, breeze through the process. ClickList removes my bad line decision making.

Price transparency: As I add items on the site, I can see my total bill in a window off to the side. That means I won’t exceed my entire student loan debt amount as I get ready for next weekend’s camping trip. It also removes the pressure of having to decide in the moment which items to take back if I go over a budget. Do I part with this bag of salad, or the quadruple-stack Oreos? GIVE ME THE OREOS NOM NOM.

Eliminates impulse buys: Not sure if this a pro or a con … but I left with mostly the essentials, and not bags full of Chips Ahoy, Cheez-Its and tiny sodas.

Far away: Fred Meyer does not offer pick-up service at any of its stores in the city of Seattle. The closest one to me is in Federal Way, 27 miles south of Seattle. Google Maps told me it would take eight hours to get there. Oh wait, that’s walking time. But it was rush hour, so close enough.

Cost: Is it worth it to pay $5 every time to have someone else do my shopping for me? For some, $5 can make a big difference, especially if they take multiple trips every week.

Requires advanced planning and can’t be modified day of: Orders must be submitted by midnight to be picked up the next day. That means calling an audible out of the fancy dinner I promised to make that night and going for frozen pizzas instead. I inevitably forget items — which I did on this trip — so I have to decide whether to go into the store, defeating the entire purpose of the program, or slink back home in shame without sweet, sweet Milano cookies (are you sensing a dietary theme here?).

Cards only: ClickList does not take cash or SNAP/WIC benefits, which definitely eliminates some potential customers.

Can’t get everything in the store: Many of the grocery items are widely available, but some items from non-grocery departments are not. I can get everything for my summer barbecue, but I can’t get someone to bring the grill itself out for me. It probably wouldn’t fit on the little cart anyway.

Here’s what my wife Megan — who never used to go shopping with me, but now insists on joining so she can get her body weight in pickles and chocolate milk (thanks pregnancy cravings!) — thinks of the service.

Asking if you want to buy stuff you’ve already bought is really good because people do tend to just buy same thing at the grocery store over and over again. When you’re cycling through that you realize “we ran out of this, no we don’t need this.”

The selection is limited compared to actually being at the grocery store, especially if you aren’t looking for processed food. As a default you could end up buying a lot more processed food than you might buy. Even just looking at the rolls, I couldn’t get the fresh rolls from the bakery I wanted, so I got the ones that are going to be more preservative-heavy.

But I did like being able to look in the fridge and see if we have things. That’s something we can sometimes do if we make really good list before we go, but even then we tend to make a list of essentials and leave snacks to what the heart desires.

Personally, I enjoyed the experience. Apart from setting up shop closer to my house and not adding an extra cost for the service, there’s not a lot of room for Amazon’s future service to improve on the Fred Meyer experience. Making my list was convenient, saved time and kept me from buying too many impulse items. But, the participating stores in the area are so far away it cancels out time saved. So if the Ballard or Greenwood locations (hint to Kroger corporate) add the service, I would be much more likely to use ClickList frequently. I’m also unsure if I would continue to use the program once I’m out of free orders. How much is convenience worth?