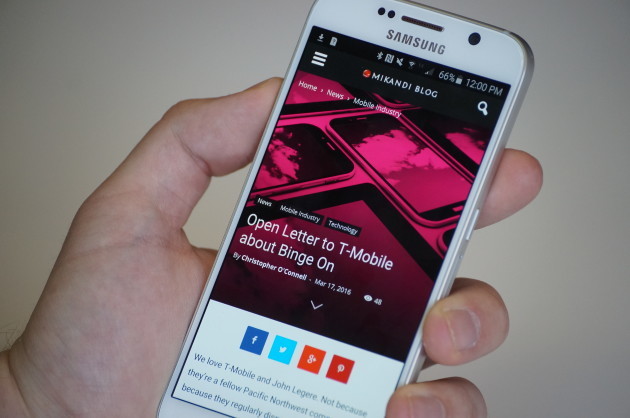 T-Mobile’s Binge On program has been controversial from the start, but the latest partner in the program may be the most controversial yet. Adult app maker MiKandi has joined the program, allowing MiKandi Theater subscribers to stream adult videos without counting against data plan limits.

“From creating the world’s first and largest adult app store, to making Google Glass sexy, we’re all about pushing technology forward the most fun way we know — with naked people,” writes MiKandi co-founder Jennifer McEwen in a (NSFW) blog post announcing the news. “So when we learned of Binge On and T-Mobile’s promise to keep it open to anyone who can meet the technical requirements, we were chomping at the bit to get a taste.”

“When mainstream tech companies announce new platforms it tends to be another way to censor your online experience. This was not the case with T-Mobile’s Binge On,” MiKandi CEO Jesse Adams said in a (NSFW) blog post. “As the first adult company to join the program, we were openly embraced and supported by their integration team, which makes them light years ahead of most tech giants in acknowledging what their customers really want. T-Mobile is treating adults like adults and we hope that other tech companies follow in their footsteps.”

While today’s announcement embraces T-Mobile’s program, MiKandi had previously expressed concerns over Binge On and its effect on net neutrality. The adult entertainment company, however, was swayed by T-Mobile CEO John Legere’s letter to customers explaining the program.

“Ultimately, we agree with Legere that with modern video compression, Binge On provides a sufficient experience for most streams to mobile screens,” MiKandi co-founder and CTO Christopher O’Connell said in a second (safe-for-work) post on the process of joining Binge On.

And while T-Mobile didn’t do anything to keep MiKandi out of the Binge On program, O’Connell does worry that the bar for implementing the required technical elements was a little high.

“[T]he integration process could be significantly streamlined,” he said. “While T-Mobile engineering has worked very hard—even some weekends—to integrate with us, it seems that many of the actual steps might be better if they were automated.”

“When we first heard about Binge On, we were concerned that T-Mobile would use artificial technical requirements and complexity to effectively ban companies they didn’t want to work with from participating. They have not done so,” he said. “We’re thrilled that T-Mobile has worked hard to integrate with us. Thanks for preserving access to the open internet.”

MiKandi Theater subscribers can now stream content over cellular without affecting their data plan through the Android app or through the browser on iOS and Windows devices.