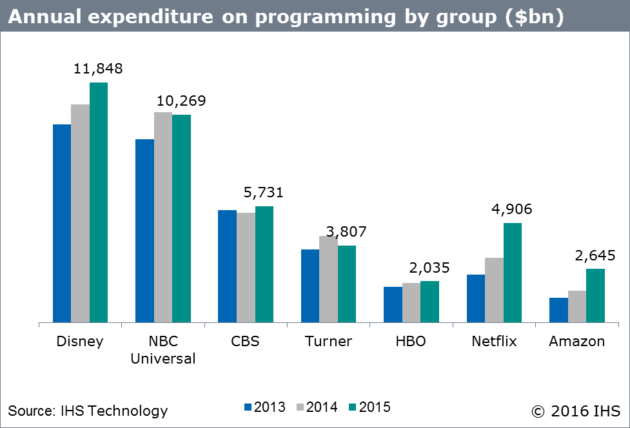 Amazon and Netflix are not only challenging each other for online streaming dominance, they are going after major networks by upping spending on original shows.

A new study by IHS Markit on television production trends found that Amazon and Netflix both more than doubled spending on new shows in the last two years. Amazon dropped $1.22 billion in 2013 and spent $2.67 billion in 2015. Netflix’s spending on original content rose from $2.38 billion to $4.91 billion over the same period.

Major networks still lead the spending race, with Disney, which owns ABC, clocking in at $11.84 billion and NBC spending $10.27 billion. But Netflix and Amazon are catching up. Netflix outspent HBO and Turner in 2015, and it is closing on CBS, which spent 5.7 billion in 2015.

“In what Netflix calls the era of internet TV, more and more consumers are watching content online, shaking the foundations of the traditional TV industry,” said Tim Westcott, senior principal analyst at IHS. “However, it’s premature to declare that the era of linear TV is already over, and Netflix and Amazon have come hard on the heels of a boom in production of original drama and comedy by the likes of AMC and FX in the US.”

The report notes that Hulu in the U.S. and China’s Youku Tudou, iQiyi and Tencent have upped spending on original programming as well.

The rise of these streaming networks has led to a proliferation of original online programming. In 2012, according to the report, there were only three U.S. online-only scripted shows. In 2015, that figure rose to 41.

Despite increased investments from competitors, Netflix remains the top dog in the online streaming market, but Amazon is gaining ground. Taking aim at Netflix, Amazon began offering a monthly $8.99 Prime subscription in April so members could access its video streaming service.

Amazon’s rise is due in part to its investment in original content. Award-winning shows like “Transparent,” “Man in the High Castle,” and “Mozart in the Jungle” have helped Amazon Video quickly become a competitor in the video streaming space. The model was pioneered by Netflix, with original series like “House of Cards” and “Orange is the New Black.” Amazon said it planned to double spending on original shows in the second half of this year compared to the same period last year.