Microsoft CFO Amy Hood has advice for folks that lack the confidence needed to work their way up a company: Fake it ’til you make it.

Hood, who became Microsoft’s first female CFO in 2013, spoke on a panel in Redmond, Wash. on Wednesday at the second annual KPMG Women’s Leadership Summit, an event held in conjunction with the KPMG Women’s PGA Championship at Sahalee Country Club this weekend.

The Microsoft executive was joined by Mary Meeker, the Kleiner Perkins Caulfield & Byers general partner well-known for her annual “Internet Trends” report, and John Veihmeyer, chairman of KPMG International, for a discussion about “leading in a changing global marketplace.”

Hood was asked by an audience member about taking on “stretch roles” without having much confidence in one’s own abilities to do the job, and what advice she might have for building that faith. 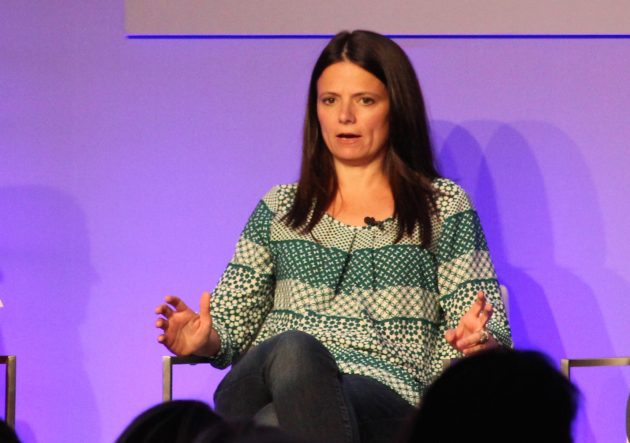 Hood, ranked No. 44 on Forbes’ World’s Most Powerful Women list, explained that when she initially took on new, higher-level roles — like trying to run Microsoft’s 2,000-person financial group, for example — she would spend a lot of time listening to her team.

“Listening to them gave me confidence that I did understand the issues that needed to be addressed, even if I felt maybe like I wasn’t close enough to all of them,” she said.

Once you tackle the initial “big moments” — giving your first big speech, doing your first earnings call, etc. — Hood said that the confidence starts to build.

“You’re kind of a survivor … you kind of grit it out,” Hood noted. “Someone asked me what the most successful quality I think I have is. I’m pretty gritty. You can work through most things and come out on the other side feeling like you’ve learned a good lesson and you’ll get better.”

Every step, every risk I took, built confidence.

Added Hood: “You fake it a little, have a few early wins, rely on your team, and then keep at it.”

Earlier in the discussion, Hood talked about her career before Microsoft. She took her first job at Goldman Sachs where “you move fast or you get moved over,” and as she landed at Microsoft in 2002, she said “I continually took jobs I really wasn’t really qualified for.”

“Every job I took, I was deeply uncomfortable in terms of feeling unqualified,” she noted. “Every step, every risk I took, built confidence.”

“On the way to work, I say to myself everyday, ‘today is a good day for a good day,” she explained. “You have to start every day feeling like that is the day you’re going to continue to make progress. Some days I don’t. But I wake up the next day deeply believing on my drive in that I will make a difference that day. It is super empowering, frankly, to have that world view. It doesn’t come overnight, but nothing really good does.”