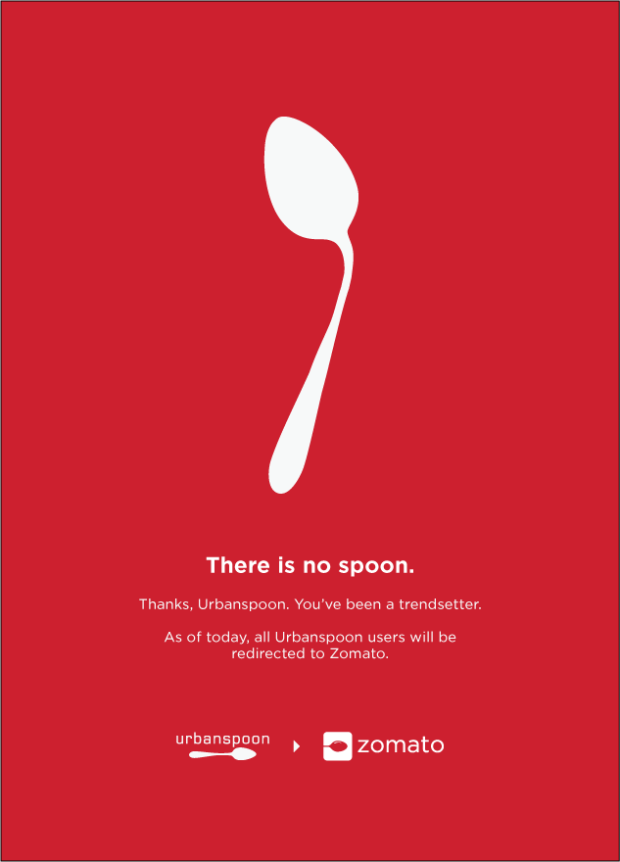 That was the message on Zomato’s Facebook page today, announcing it had shut down Urbanspoon after acquiring the Seattle-based restaurant reviews site for roughly $60 million earlier this year.

It is a somewhat abrupt ending for Urbanspoon, which was founded nine years ago and had been operating previously under Barry Diller’s IAC portfolio of Internet brands.

There’s a long list of the changes that are taking place as part of the transition, but the most notable one is the end of the iconic “shake-to-search” feature that Urbanspoon’s customers gravitated to in the early days. The innovative iPhone feature allowed users to shake the device in order to find nearby restaurants, but the feature is not being carried over to the Zomato app.

The website and app’s shut down is not a big surprise.

In January, when Zomato acquired Urbanspoon, the New Delhi, India-based company said it was interested in using the Urbanspoon’s 31 million app downloads and huge directory of restaurants to help battle the heavyweights of the industry, like Yelp. As part of that, it announced it would phase out the Urbanspoon brand.

A month after the acquisition, Zomato’s CEO Deepinder Goyal acknowledged in a blog post how valuable Urbanspoon’s user base in the U.S., Canada and Australia was to Zomato, saying that by the time the two company’s merge, “two-thirds of our overall traffic will be coming from just these three countries.”

To make the transition easier, Zomato tossed out its new logo for an image of a spoon, much like the one Urbanspoon customers were used to.

“It’s important to us that we don’t lose a lot of Urbanspoon users by giving them a new name, a new logo and a new product,” he wrote. “This is a simple case of making sure that the transition (of merging Urbanspoon to Zomato) is the least painful for the most number of our users.”

Urbanspoon decided a sale was the best course of action after realizing that continuing to compete with Yelp and others would require a sizable investment. Other companies that participated in the bidding process included The Food Network, Yelp and Groupon.

Visitors to Urbanspoon.com today were automatically redirected to Zomato.com. The Urbanspoon app continues to work, but a note at the top of the page warns users that all content and accounts have been migrated over to Zomato.

Many of the other major changes taking place have to do with merging the two companies’ rating systems. Urbanspoon used “likes” and “dislikes,” and Zomato has a 5-point scale. Another change being made has to do with the company’s leaderboards, where frequent bloggers and reviewers get recognition. Going forward, a review will earn a person 25 points, whereas a photo earns two points.

All full list of the changes can be seen here.