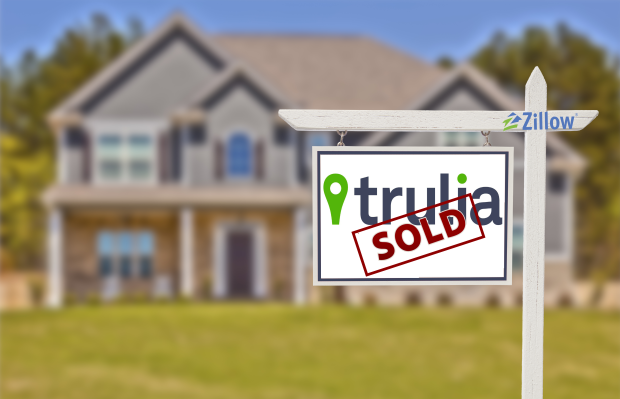 Zillow and Trulia are now one.

The online real estate giants today officially combined operations, with Zillow closing the acquisition of its longtime rival for $2.5 billion in stock, creating a juggernaut in the industry with 2,000 employees and roughly 130 million monthly visitors.

That’s down from the $3.5 billion price tag when the deal was first announced last July.

As a result of the acquisition, Zillow will now operate under the name Zillow Group, comprised of four real estate brands: Zillow, Trulia, StreetEasy and HotPads.

In an interview with GeekWire, Zillow CEO Spencer Rascoff called it a “big day.”

In addition, Zillow confirmed that layoffs will occur as part of the transaction, with 350 staffers expected to lose their jobs. The company eliminated 280 people at the combined company — mainly in San Francisco and Bellevue — today. Another 70 staffers will be let go by the end of the second quarter.

“That is always the hardest part of any transaction like this because it involves real people,” said Rascoff. “And people are always our highest priority, and it has weighed on me and has been a focus of ours.”

GeekWire reported on the layoffs earlier today, though the exact number was not previously known.

Zillow Group — which will continue to trade on the Nasdaq under the ticker symbol “Z” — will employ 2,000 people after the layoffs are completed.

It’s been a tough road for Zillow to close the acquisition of Trulia, one which Rascoff said took longer than he anticipated. He called the process “long and arduous and stressful.” Asked if the deal was ever in jeopardy of not getting approval, Rascoff bluntly said “yes.”

“It seems patently obvious to me that Zillow + Trulia is not a monopoly,” he said. “But it took the SEC a little longer to reach that conclusion than we would have liked, but I am very pleased that they reached the correct conclusion.”

Trulia co-founder Pete Flint will join the board of the Zillow Group, though he will no longer have day-to-day responsibilities at Trulia. Those duties will now shift to Paul Levine, who takes on the title of president of Trulia.

Rascoff also said that Zillow Group will continue to operate at least a portion of the Market Leader business — which was acquired by Trulia for $355 million in 2013. Based in Bellevue, Market Leader powers the real estate offerings of large brokerages such as Realogy and Keller Williams. It will continue to employ about 125 people, and Rascoff stressed that the relationships and software powering Realogy and Keller Williams will continue.

However, he said that Zillow will evaluate the “retail business” of Market Leader and whether it will be supported going forward.

In fact, Rascoff said that the biggest challenge facing the company will be the integration of the products from Zillow and Trulia on the backend.

“There are significant product challenges before us around integrating parts of our software stack,” said Rascoff. On the consumer side of the business, Rascoff said that the products will remain relatively independent. However, the industry-oriented products targeted at real estate professionals will undergo a deep integration.

“That will require a lot of hard work,” said Rascoff. “And that is critical in order to make this deal a success as one of the primary drivers of this transaction was a desire to make it easier for real estate advertisers to reach an even larger audience by buying media from Zillow Group.”

Here is the full press release:

Zillow, Inc. today announced it has completed its previously announced acquisition of Trulia, Inc. for $2.5 billion in a stock-for-stock transaction, and formed Zillow Group, Inc. (NASDAQ:Z), which houses a portfolio of the largest and most vibrant U.S. real estate and home-related brands on mobile and the Web. In addition to Zillow and Trulia, Zillow Group’s consumer brand portfolio includes StreetEasy, New York City’s leading real estate marketplace, and rental search brand HotPads.

“This is a pivotal day in online real estate and we couldn’t be more excited to welcome Trulia to Zillow Group,” said Spencer Rascoff, CEO of Zillow Group. “Each of our brands share a consumer-first philosophy, and our powerful combination of insights and expertise will drive even greater innovation for consumers, empowering them with essential information they need to make critical financial decisions. Our combination will also enable real estate professionals to more efficiently and easily reach the nation’s largest audience of engaged buyers, sellers and homeowners, and extract even more value from their advertising.”

Paul Levine, previously Trulia’s chief operating officer, has been named president of Trulia, reporting to Rascoff. Pete Flint, co-founder and former CEO of Trulia, has joined the Zillow Group board of directors, as has former Trulia board member Greg Waldorf. Zillow Group is expected to begin trading on Nasdaq on Feb. 18, 2015, under the ticker symbol “Z” and will inherit the trading history of Zillow Inc., which also traded under the ticker symbol “Z”.

Later this year, Zillow Group expects to begin to offer shared services and marketing platforms for advertisers and industry partners that will enhance efficiency and deliver greater return on investment. Information about any changes will be communicated promptly to advertisers and partners.

In connection with the close of the acquisition, the companies eliminated approximately 280 positions, primarily in San Francisco and Bellevue, Wash., due primarily to redundancy in the combined company’s sales and administrative organizations. Another 70 positions will be eliminated as of the end of the second quarter, at which time Zillow Group will have approximately 2,000 employees. The approximately 350 affected employees have already been notified.

Zillow Group intends to provide pro forma financial results for the year ended December 31, 2014 prior to its first quarter earnings report, tentatively planned for May 2015. Information about Zillow Group, including media and investor information, can be found at www.zillowgroup.com. Zillow Group news can also be found at the Twitter handle @ZillowGroup.

Zillow Group acquired Trulia in a stock-for-stock transaction valued at $2.5 billion, based on the closing price of Zillow stock on Feb. 17, 2015. As part of the agreement, Trulia stockholders received 0.444 shares of Class A Common Stock of Zillow Group, Inc. for each share of Trulia Common Stock, and own approximately 33% of the combined company as of closing. Current Zillow holders of Class A Common Stock and Class B Common Stock received one share of comparable Zillow Group Common Stock, representing approximately 67% of the newly combined company. Zillow Group now has approximately 70.5 million fully diluted shares outstanding. Trulia’s convertible notes have been assumed by Zillow Group. The acquisition of Trulia was announced on July 28, 2014, received shareholder and stockholder approval for each company on Dec. 18, 2014, and Zillow was notified by the Federal Trade Commission of its assent of the transaction on Feb. 13, 2015.