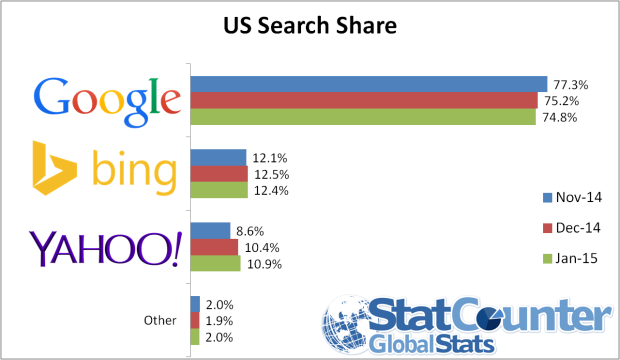 Yahoo’s deal with Mozilla to become the default search provider for U.S. Firefox users has paid off. The company handled almost 11 percent of all U.S. search referrals in January, the highest point for Yahoo in five years, according to new numbers from StatCounter.

Almost all of that came at the expense of Google, which saw its share dip to 74.8 percent of the global search market. The Mountain View-based company still has a lock on search, but it’s clear that its position isn’t completely unassailable. That’s good news for Yahoo, which is trying to pick up gains any way it can under the direction of CEO Marissa Mayer. 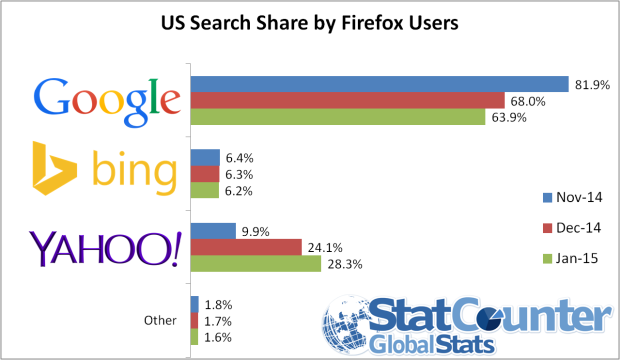 Yahoo made up more than 28 percent of the search share from Firefox users, a jump of more than 18 percent over where it was in November before paying to become the default search provider for the open source browser.

Bing, meanwhile, hasn’t seen much change. Microsoft’s search share was roughly flat over the past three months, hovering slightly above 6 percent. Yahoo’s gains are still a benefit to Microsoft because of the search alliance between the two companies, which includes a technology and revenue sharing agreement. 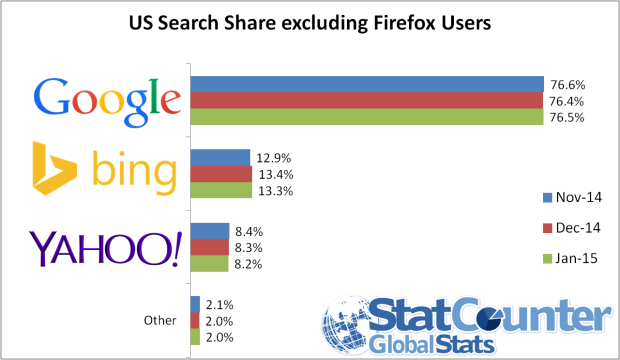 The rising tide of Firefox users searching through Yahoo isn’t affecting the broader search market, though. Yahoo’s share of the search market has remained roughly flat aside from the change among Firefox users. The message from the data seems clear: Google is still top dog, but Yahoo has a chance to pick up more users, especially among those people who don’t care how they search the web so long as some results come up when they type a query into their browser.