He is a devoted Apple customer, owning an iPhone, iPad, iMac, and MacBook. His favorite app is BillGuard since it “makes it easier to manage your money.” He has both an Xbox One and PlayStation 4, but calls himself an Xbox guy because it’s “so interactive.”

Oh, and Kevin Pierre-Louis also happens to play football on Sundays for the Seattle Seahawks. 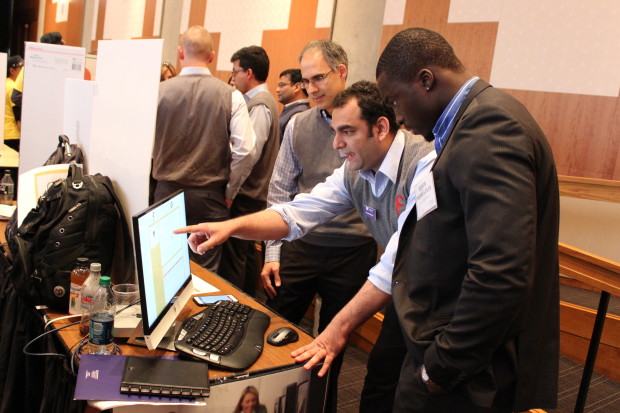 The second-year linebacker paid a visit to a University of Washington Technology Management MBA business pitch expo on Friday evening, but not because of a team requirement or a sponsor’s request.

“The NFL stands for ‘Not For Long,'” he told GeekWire. “This is just a great opportunity to meet people and see how they are getting together to brainstorm ideas. It gets my mind working in the right direction.”

The NFL says the average career length for a player is just over six years; others say it’s really only half of that.

Regardless, it’s smart for players to think about what they’ll be doing after football.

“I’m not sure what field I want to go into,” Pierre-Louis said. “I’m just very hungry for information.“ 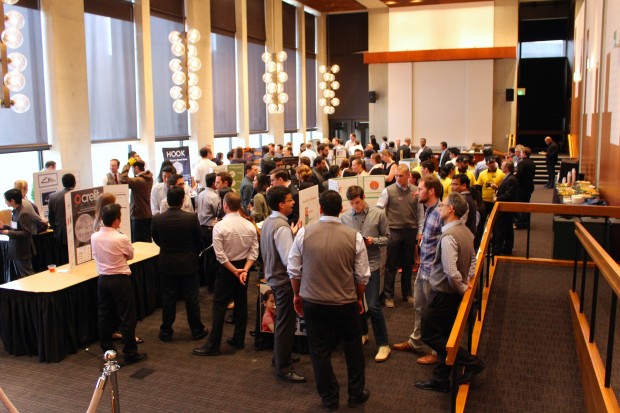 Pierre-Louis calls himself the geekiest guy on the Seahawks. “I think I am the most outspoken about being geeky,” the linebacker said. “There are a couple guys that tell me I’m a little weird, but I like that, I embrace that. I like being different.”

He noted that though an NFL career may only last a few years for the average player, there are valuable lessons learned through football that can apply to a business-related job after it’s time to hang up the cleats.

“You learn teamwork, you learn camaraderie,” he said. “You also understand that when there’s a deadline, you have to really hone in on your skills, buckle down, and finish whatever you need to do. And we go at it in a very aggressive manner. Business can also be aggressive. I’ve played football all my life and business would just be something else, but on a different playing field.”

The Seahawk added that he’s noticed more technology being used before, during, and after NFL games, and particularly during practices.

“We monitor how many reps we’ve taken, how far we’ve run,” said the Connecticut native. “It helps the body and helps us perform better.”

Pierre-Louis was invited to be a judge at Friday’s event by Julie Sandler, a Principal at Madrona Venture Group who also teaches an MBA course on Entrepreneurship at the UW’s Foster School of Business.

Madrona’s Matt McIlwain hosted a small event earlier this month that brought together a group of Seahawks who were interested in technology and business. Pierre-Louis wanted to get more involved with innovation at the UW, and Sandler thought her expo was a good start.

More than 80 students and 13 teams packed the second floor of Kane Hall and pitched their companies to several of the region’s top entrepreneurs and investors, who had the chance to judge each idea and give out one million fake investment dollars to the team or teams they liked the most.

“Since tonight’s expo was all about the art of communication, intensive teamwork, and leadership, who better to invite as a judge than a sharp, talented member of a team that’s world-class in exemplifying those precise qualities,” Sandler told GeekWire afterward. “It’s special for the MBAs, too. Pretty unique to have your final exam graded by the city’s top investors, CEOs, and a Seahawk.”

The team with the most fake investment dollars was Yowgii, which plans to generate water through condensation to help countries — particularly ones in arid climates — in need of H2O.

This was Sandler’s first year putting on an expo that allowed her students to pitch their ideas in a real-life setting. The event doubled as a final exam, as total “capital” raised by each team factored into final grades.

“In one hour, as our ‘angels’ walked around the auditorium, at each booth the students had the opportunity to hear three dozen sets of ideas and forms of pushback to their ideas,” Sandler said. “They had to be adaptable and think on their feet. It makes me proud to see them just totally thrive in this context.”