DALLAS — Turns out GeekWire isn’t the only Seattle startup squad down in Dallas this week.

While we’re in town covering Dallas Startup Week, the co-founders of Trafinity also arrived in Big D on Monday — albeit for a much different reason. 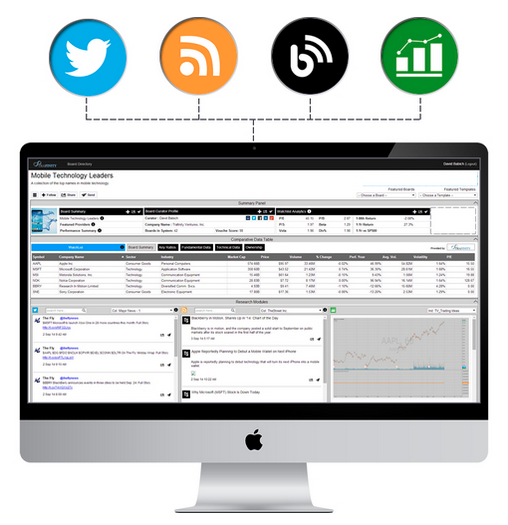 The Seattle-based startup was just accepted into the newest class of Tech Wildcatters, a nationally-ranked Dallas-based B2B accelerator that provides capital, mentorship, and education for three months. This is Tech Wildcatters’ seventh class — stay tuned for an inside look at the accelerator later this week on GeekWire.

Trafinity, meanwhile, is a curated research platform that tracks the flow of information based on keywords across a wide variety of content channels. The company is focused on the finance industry for now, helping clients digest information around public companies, financial assets, market sectors, major indices, and more.

“The ultimate goal of a platform like Trafinity is to optimize the research process, enabling users to digest more information and content publishers to push information to their target audiences more effectively,” co-founder Dave Babich said.

But why did the 18-month-old company, which already raised $300,000 from angels in Seattle and and elsewhere, move its operations to Dallas for the next three months?

“Trying to raise money for a finance technology product in Seattle is like pulling teeth,” Babich said. “We just couldn’t get the message across that we wanted to and Tech Wildcatters was a good opportunity for us to build more of a pipeline of investors.”

The goal, Babich said, is to eventually connect with investors in a finance hub like New York City. But the temporary move to Dallas, which is home to several big banking companies, wasn’t a decision purely driven by a funding issue. It’s also about developing relationships and receiving mentorship in areas like marketing and PR — the company already had five mentor meetings just two days after arriving at Tech Wildcatters.

“There are so many different connections we can have with Tech Wildcatters,” said co-founder Dave Niederkrome. “They have a great reputation.”

Babich and Niederkrome, who both grew up in the Seattle region, say they “definitely plan on having a presence in the Northwest” once they graduate from Tech Wildcatters. The startup still has three other employees working in Seattle as the founders spend the next 12 weeks in Dallas.

While they’re excited to build their company at Tech Wildcatters, Babic and Niederkrome already miss one aspect of the Emerald City.

“When I left Seattle, it was sunny and gorgeous,” Niederkrome said. “But what’s up with the weather here? Ice and snow in Dallas? C’mon. I brought a windbreaker and definitely didn’t dress for the weather.”

Up next: Inside Tech Wildcatters, the nationally-recognized Dallas B2B accelerator

Editor’s Note: GeekWire has partnered with UP Global and Chase to cover four Startup Week events around the country, starting with Tampa Bay earlier this month, Phoenix from Feb. 23 to 27, and Dallas this week. Tune in to GeekWire for more stories about the activities, and to learn more about these emerging startup hubs.