Editor’s Note: GeekWire has partnered with UP Global and Chase to cover four Startup Week events around the country, starting with the Tampa Bay Startup Week from Feb. 2-6. Tune into GeekWire for more stories about the activities, and to learn more about this emerging startup hub.

The Tampa Bay region is not all about sunshine and sand.

This historic Florida port, birthplace of Hooters and Wikipedia, has startup fever in a big way.

Comprised of the waterfront cities of St. Petersburg, Clearwater and Tampa, this sun-soaked region of 4 million residents is making a serious play to create one of the country’s most desirable entrepreneurial hubs.

What isn’t there to love?

Relatively cheap housing, an emerging research university and an ambitious downtown development backed in part by Microsoft co-founder Bill Gates. And then there are the beaches — miles and miles of pristine beaches. (Weather forecast today: 77 degrees and sunny).

“In some ways, Tampa is an amazing secret,” said KiteDesk co-founder and CEO Sean Burke, a tech entrepreneur who moved to Tampa from Chicago in 2005. “I look around and say: I live where a lot of people vacation.”

Tampa is working hard to move beyond the perception of a Pina Colada-sippin’ beach town, with a number of government-led and grassroots entrepreneurial efforts helping to lead the charge.

It’s still early in the process.

“I would say emerging — we are getting there,” said Daniel James Scott, an entrepreneur and the newly-appointed executive director of the Tampa Bay Technology Forum.

Tampa has yet to establish itself as a technology hub on the order of Austin, Boston or Seattle. And venture financing — like many places — remains a problem. 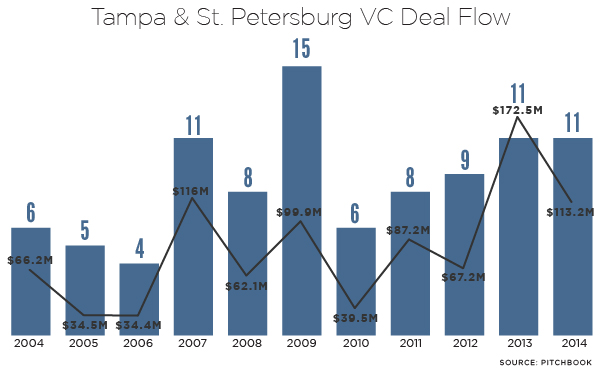 According to PitchBook, just $113 million was invested across 11 deals in Tampa and St. Petersburg in 2014 — which compares to more than $1.2 billion in the Seattle metro area for the same period.

But Scott, who moved to Florida from Cleveland, Ohio, after attending Florida State University, said a “thriving ecosystem” is emerging.

“We do have a ton of tech firms here,” said Scott. “We are not Silicon Valley from the standpoint of having the financing of these companies, but we’ve certainly had a ton of really great companies pop up out of here.”

Clearwater, Florida-based Tech Data Corp. was founded in 1974 — a year before Microsoft — and now is one of the largest distributors of technology products with annual sales last year of $26.8 billion. One of Fortune’s “Most Admired” companies, Tech Data ranks 111th on the Fortune 500, boasting a market value of $2.19 billion.

There’s also hope that the U.S. Central Command or CENTCOM, established in 1983 and located at nearby MacDill Air Force Base, could spark a wave of defense and cybersecurity startups.

More recently, Tampa Bay area startups such as WuFoo and EventJoy — both of which relocated to the Valley after participating in the Y Combinator incubator program — were sold for nice sums to SurveyMonkey and Ticketmaster, respectively.

In search of money and a tech giant

Home-grown successes such as those will need to stick around — and continue to prosper — if Tampa wants to elevate itself to an upper echelon of tech hubs.

Burke, who co-founded KiteDesk in 2011, wants to hang in his adopted home town. But he, too, feels the pull of money centers such as Boston, New York and Silicon Valley, and he said the company would consider relocating if the right financial backers came along and requested a move. “We would go anywhere to make the company a success,” said Burke, adding that it can be a struggle for entrepreneurs to raise capital and attract talent in Tampa.

Asked what Tampa’s technology community needs most, Burke paused for a second — skipping the most frequently cited issues of venture capital and developers — before noting that there’s no direct flight between Tampa and the San Francisco Bay Area.

“If we are going to get investors from the West Coast, they are not going to spend eight hours in transit,” he said. There are signs of progress on this front as well, with the Tampa International Airport embarking on the biggest expansion in its history last fall, a massive $1 billion overhaul that officials say will help put the city on the world stage. (For what it’s worth, there is a direct flight between Seattle and Tampa).

A great airport will have to service a growing economy, one where entrepreneurs are encouraged to fly high. And, as Burke sees it, one of the rubs on Tampa is that startups don’t always go for the “big swing.” Instead, they build a successful $5 million to $20 million company, and then sell out. “There has not been a Facebook or Twitter or LinkedIn,” said Burke. “Having a household name in tech would put us a bit more on the map.”

Even so, Burke is one of many who see big things happening in Tampa. The startup community — though sometimes overly fragmented in his view — is rallying.

“We have come a long way … and we are gaining momentum,” says Rebecca White, who leads the entrepreneurship center at the University of Tampa, which is undergoing an expansion of its own with plans for a new facility to be announced later this year. It now has 250 people enrolled in graduate and undergraduate entrepreneurship courses, up from about 80 students five years ago.

Linda Olson, president of Tampa Bay WaVe, a technology incubator that’s hatched over 100 startups in the past five years, agrees that things are on the move. Some wealthy Tampa Bay residents, many of whom got burned in real estate during the past economic recession, are “slowly starting to crack open the wallets,” she says.

It also helps that Tampa mayor Bob Buckhorn, who assumed office in 2011, is proactively leading an economic development charge that largely has the support of the startup and business communities. Multiple people interviewed for this story cited Buckhorn’s enthusiasm and energy in transforming the city.

Meanwhile, the historic divide between Tampa and St. Petersburg is dissolving with the political leadership of both cities seeing themselves as a more unified region, rather than disparate parts.

“We have to see ourselves as the Tampa Bay area, and we have to really work together across the bay,” said White of the University of Tampa. “I think that is happening with the two mayors that we have right now. That is really improving.”

One of the biggest aspects of Buckhorn’s redevelopment push is a project called Channelside, a once-blighted area just east of downtown. Led by Tampa Bay Lightning owner and former hedge fund operator Jeff Vinik, the $1 billion office, residential and entertainment project made headlines last September when word spread that Bill Gates’ investment company was helping to fund the effort. 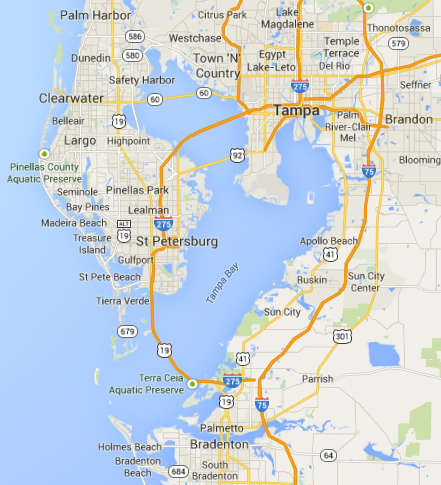 “This will put an exclamation point on the story we’ve been telling,” Mayor Buckhorn told The Tampa Bay Times after Gates’ involvement was disclosed.

“I really don’t know any other word for it,” said the native of St. Petersburg.

The more than 30-acre project includes retail, park space and housing, but perhaps most importantly from a business standpoint will be the relocation of the University of South Florida’s Morsani College of Medicine and the Heart Health Institute to a tract of land being donated by Vinik. That will put the facilities in close proximity to the university’s world-renowned Center for Advanced Medical Learning and Simulation.

In that regard, the project is similar to what Paul Allen’s Vulcan achieved in Seattle’s South Lake Union neighborhood, now home to Amazon.com, University of Washington medicine and biotechnology labs and a number of startups.

As a city, Tampa has always shown strength in health sciences, medical devices and biotechnology, buoyed in part by the 4,500-employee strong Moffit Cancer Center. The Channelside area, which is still seeking an official name of the neighborhood, could provide a central hub to consolidate some of these efforts.

I think Tampa is so unique because we are discovering our identity.”

And that leads to a central theme I picked up in my interviews with Tampa Bay residents. There’s a feeling that things are percolating, and people are largely excited to be a part of the change.

“I think Tampa is so unique because we are discovering our identity,” said Ryan Sullivan, a regular Startup Weekend organizer who is planning the Startup Week events in Tampa early next month. “We have a lot of cool things happening, and ultimately our community is coming together to pull these things off, and bring our startups to success… We are still discovering ourselves, and that is the opportunity for us.”

Fun in the sun at Tampa’s GeekEnd

For outsiders, especially those like me from sun-starved regions like Seattle, you can’t help but continue to think about Tampa as a place of sun and sand.

And there’s one place where Tampa’s emerging startup community embraces the beach lifestyle — in full force.

We live in paradise and this our day to close the laptops and remember that.”

It’s called “GeekEnd” — and it happens the last weekend of the month. The festivities start with a calorie-heavy breakfast on Thursday morning at Jimbo’s Pit BBQ on West Kennedy Boulevard where techies feast on a popular menu item known as the Geek Omelette — complete with pulled pork, sautéed onion, and BBQ sauce. On Friday, folks congregate at the Tampa Bay WaVe tech accelerator for an open pitch event, with entrepreneurs sharing ideas over pizza and beer with the larger community. 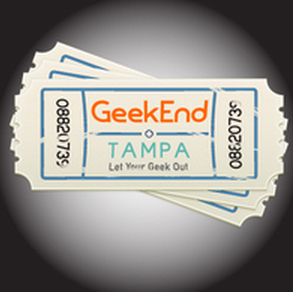 That’s all a build-up to the capstone event on Saturday, known as the Armadillo Buffet or geek beach day. Organizers Mitch Neff and Justin Davis set up awnings and tents at Madeira Beach around 10 a.m., and the crowd filters in and out all day.

Paddle boards and coolers are rolled out, with families grilling burgers and sipping on microbrews from Cigar City.

“We live in paradise and this our day to close the laptops and remember that,” said Neff, a digital strategist who also runs StartupBus events. “Conversations tend toward the fun-side of geeky. It’s here that you can tell the difference between ‘work’ and true passion. People get excited. They have fun. Most importantly, we celebrate having 10 months of beach weather.”

Did you hear that folks? 10 months of beach weather.

OK, Tampa, you may have hooked us.