SpaceX said its abort test on Wednesday would have kept humans safe.

For the first time, the Elon Musk-led company tested an eject button for astronauts who will travel in SpaceX’s Dragon 2 capsule. SpaceX called the procedure, which took less than two minutes and ended with the Dragon capsule parachuting into the Atlantic Ocean, a success.

"Had humans been on board today, they would have been in great shape."
Relive today's pad abort test in 6 seconds https://t.co/JY0eagJA1V

In order to get astronauts away from the rocket in case of an emergency, SpaceX built technology to eject the entire spacecraft from the Dragon launch vehicle thanks to eight rocket engines built into the walls of the spacecraft that each produce 15,000 pounds of thrust.

“This configuration provides astronauts escape capability from the launch pad all the way to orbit and allows the spacecraft to use the same thrusters to land propulsively on land at the end of a mission,” the company noted. 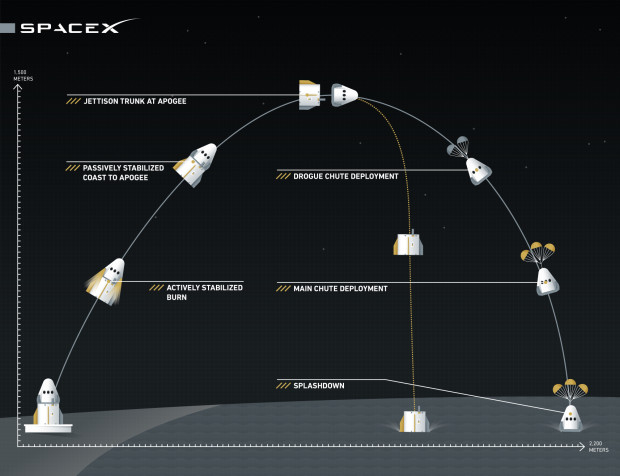 There was a dummy on board to collect data on the forces experienced inside the spacecraft. “Had humans been on board today, they would have been in great shape,” SpaceX said.

The original Dragon was the first commercial spacecraft to resupply the International Space Station. The Dragon 2, meanwhile, is built to carry astronauts into space.

“This test will provide valuable data for future flight testing of the Crew Dragon spacecraft, including a high-altitude abort test and an uncrewed mission to the Space Station,” SpaceX said today.

Check out more pictures of the test here, or watch the video below: