Starbucks’ Adam Brotman and I met up in a Starbucks this morning to talk about the launch of mobile ordering at 3,400 more stores. As of today, customers at more than 4,000 company-owned stores across 26 states can use their mobile phones to skip the line. 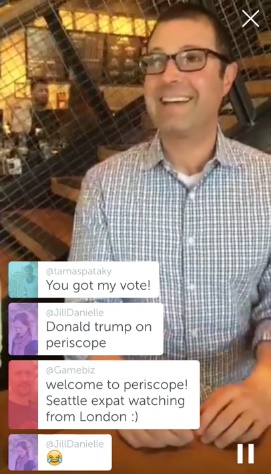 The conversation took place at a Starbucks in Seattle’s Fremont neighborhood, but also virtually online via Twitter’s live streaming Periscope app, where viewers got to tune in live and interact with the conversation, by “liking” it and asking questions.

Here are five highlights from the chat:

How long has it taken to get mobile ordering live in all 4,000 cafes?

The first pilot went live in Portland in December, but it took more than a year before that to design the process, from what the experience would be like on the mobile app to how the employees would deal with flow of virtual orders coming in, Brotman said. “We needed to make sure it was just as easy to order on the phone as it was in person. That took us a good part of a year, maybe even longer, to be honest. We really thought about how to craft the experience.”

Any more details on when it will be available on Android other than sometime later this year?

Brotman said even though Android makes up about half of its mobile customers, Order & Pay is still only available on iOS. “It’s coming very soon,” he said of Android. “I don’t want to over-promise and under deliver, so I will say end of this year, but we are shooting for end of summer.”

How fast does it take for customers to notice that a new store has gone live, and for mobile orders to start rolling in?

“Minutes,” Brotman said. “We’ve already had thousands and thousands and thousands of orders this morning.” As for number of overall orders that Starbucks has received over the past six months, Brotman wouldn’t specify. “It’s going well, and better than expected. Seattle ramped up faster than Portland. Portland went well and Seattle went even faster….Now you can get that extra visit in that you wouldn’t normally be able to.”

“We are piloting the ability to have (delivery) on the Starbucks app in partnership with Postmates later this year in Seattle,” he said, adding that there will be a flat delivery fee for the service.

Today, Donald Trump got 4,000-plus followers on Periscope while announcing his presidential bid. How did Brotman stack up?

Despite not throwing his hat into the race, Brotman racked up 291 live viewers and 402 likes in about 20 minutes.

In case you missed it, here’s the full video: