On most nights, the cafeteria inside Microsoft’s Building 121 is silent and peaceful. But this past Wednesday — and Thursday morning, technically — the scene was a bit different.

That’s when more than 700 employees, family members, and friends with Indian ties gathered for a big watch party on the Microsoft campus in Redmond as defending champion India took on Australia in a Cricket World Cup semifinal match. 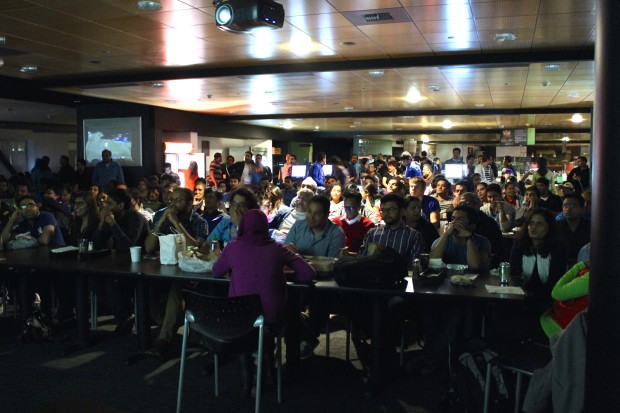 Grandmothers, grandchildren, and everyone in between were in attendance, as fans munched on Indian cuisine and drank chai tea while cheering on their team. The energy inside building 121 was electric, with people playing traditional Indian instruments, dancing around, and high-fiving one another each time something happened in India’s favor.

Since 2003, Microsoft software engineer Pranav Kandula has helped organize the watch parties each time India plays in the Cricket World Cup. Cricket — a bat-and-ball game originating in southern England in the 16th century — remains an oddity for most Americans, but Kandula explained what the sport means to people in India.

“Cricket is like a religion there,” he said. “Cricket players are considered as demigods. India making it to the semifinal — this is a big deal.”

Even though cricket has yet to grab the attention of American sports fans, there’s one pocket of the U.S. population where the game resonates: Tech workers who hail from countries such as India, Pakistan, England and South Africa. 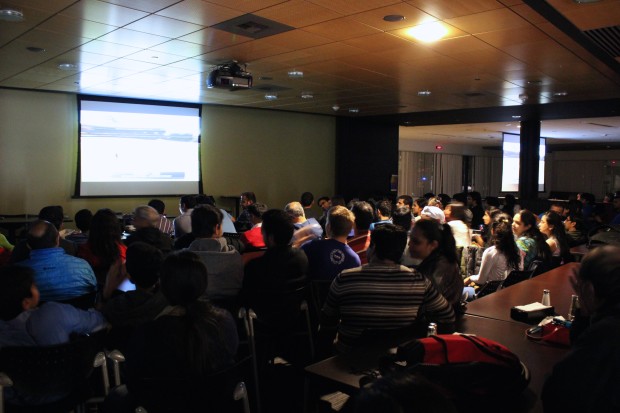 It is not uncommon to see cricket played on the many sports fields at Microsoft or at nearby Marymoor Park. The game’s popularity here is tied directly to Microsoft’s growth, which has steadily hired Indian software developers and engineers over the past two decades.

“We are very passionate about cricket,” said Rajesh Munshi, a Microsoft engineer. “We live cricket, we breath cricket. It’s such a big part of our lives, and even though we are very far from India, the spirit is still here.”

There actually was one Australian cheering on his home country at the watch party on Wednesday night. While Microsoft systems engineer Ed Cook noted how passionate Australians are for cricket, he did admit that Indians “maybe take the intensity to a new level” and said he wouldn’t necessarily be super disappointed with Australia losing.

“I won’t be sad if we lose because I work with a lot of Indian people and tomorrow will be hell if Australia wins — they will hate me,” Cook said.

Australia ended up defeating India by 95 runs as the defending champions were stopped short of winning their second-straight World Cup title — let’s hope Cook and his colleagues still get along.

Check out the video below for more from the Microsoft watch party: