Uber is making its own magazine — for riders, this time.

The on-demand ride-hailing giant is filling backseat pockets of its New York City-based vehicles this week with the first edition of Arriving Now, a new magazine produced by the company. It’s similar to how airlines produce their own in-flight magazines for flyers. 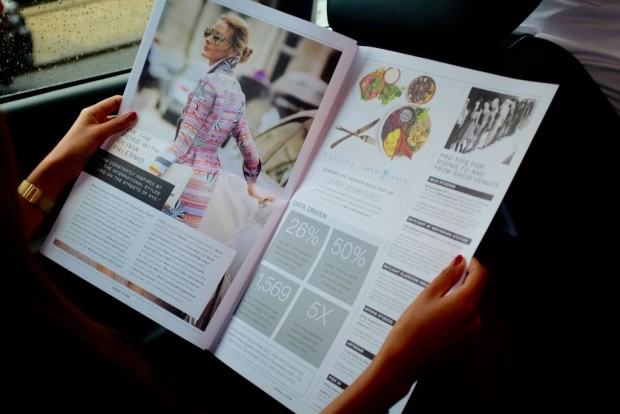 Uber said today that the first issue is in celebration of New York City’s Fashion Week.

Uber added that customers can take the magazines home, if they’d like.

One interesting phrase Uber uses is “exclusive details about upcoming promotions.” It will be interesting to see how Uber uses its content publishing arm to promote its own products, sell advertising, or do something that creates extra revenue. It could be similar to how some taxis put small TVs in the back of their vehicles that passengers can often interact with.

The company rolled out a quarterly publication for its drivers back in March called Momentum, which had articles about how to stay healthy and in shape, a spotlight on new Uber city Austin, and pro tips from a long-time Uber driver. Issue 2 rolled out in July.

Airbnb did something similar this past November when it launched Pineapple, a quarterly magazine distributed to its hosts and sold in bookstores and retailers across North American and Europe. However, Airbnb’s Pineapple web page still lists Issue One from Winter 2014. We’ve reached out to Airbnb to see the status of Pineapple.

Editor’s note: Uber’s magazine is only available to riders in New York City for now.