As more companies stay private longer, and are raising larger and larger rounds, the trend appears to be benefiting venture capital firms, which were able to raise more money in the second quarter than in any other three-month period since the end of 2007.

According to a report released Wednesday from Thomson Reuters and the National Venture Capital Association, U.S. venture capitalists raised $10.3 billion over 74 funds during the second quarter. That’s an increase of 39 percent over the first quarter, and 27 percent over the same period a year earlier. It’s also the most money raised since the Q4 of 2007 when VC firms collected just over $10.4 billion. 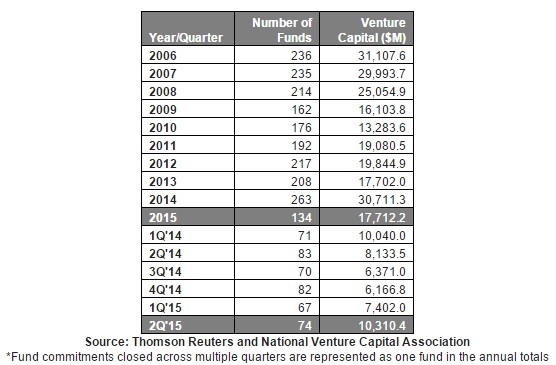 “If this pace continues, we are certainly on track to surpass total fundraising for all of 2014 in what we hope is a more favorable environment across the venture industry, not just isolated at the top among a few marquee firms,” said Bobby Franklin, President and CEO of NVCA.

Two Seattle area VC firms announced new funds during the second quarter. Bellevue’s Ignition Partners — known for backing such companies as Chef, Cloudera and Couchbase — raised its sixth fund worth $200 million. And, Seattle’s Madrona Venture Group announced its sixth fund worth $300 million. In the past, it’s bankrolled such companies as Redfin, Apptio, iSpot.TV and others.

The report out today said a total of 74 funds were raised, including 43 funds from existing firms. But an unusually high number of new firms — 31 — were born during the second quarter, making it the strongest period for first-time funds since the beginning of 2014. Back then, 32 first-time funds were formed.

Madrona Venture Group’s Matt McIlwain previously addressed the level of interest among investors. “We had way more demand than we were going to be able to accommodate. Our scarce resource is our time and our ability to add value. Could we have raised a $500 million fund? No doubt in my mind.” 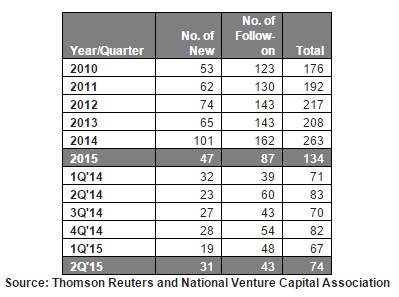 Ignition also said it decided to keep things small, but could have easily raised $300 million based on demand. But right now keeping it small is not always the case.

During the quarter, New Enterprise Associates 15 raised $2.8 billion, making it the largest all-time early stage VC fund since records began in 1980. Other new funds include Institutional Venture Partners XV, which raised $1.3 billion and Social Capital Partnership III, which raised $600 million. These three funds alone nearly account for half of the quarter’s fundraising.

Some of these big funds are raising more money to match the needs of companies that are choosing to remain private for longer, and raising big rounds instead of going public.

A so-called “unicorn” is a privately held company that tends to raise hundreds of millions of dollars at a time and has a $1 billion-plus valuation. We’ve noted before that these companies are impacting the flow of companies into the public markets. For instance, in the first quarter, IPOs hit a two-year low, with just 34 companies existing during the period.

How the lack of exits will ultimately impact VCs, and whether these valuations can be sustained is a frequently discussed topic. For now, it appears that investors are eager to get in on the action.

“What this all means is that fundraising is finally scaling up to the level of venture investment we’ve witnessed over the past few years, and the institutional investors are recognizing the great opportunities to invest in the next generation of American companies,” said NVCA’s Franklin.

Meanwhile, a separate report from Pitchbook found that 72 VC funds in North America raised $11.7 billion in the second quarter. That was up from 61 funds in the first quarter which raised $7.9 billion.