To Amazon, it was just another Facebook post. It went up at 2:01 p.m. on Wednesday afternoon: “The Petzi Treat Cam is a remote treat dispenser and camera that lets you see, speak, and treat your pet from anywhere, at anytime.” 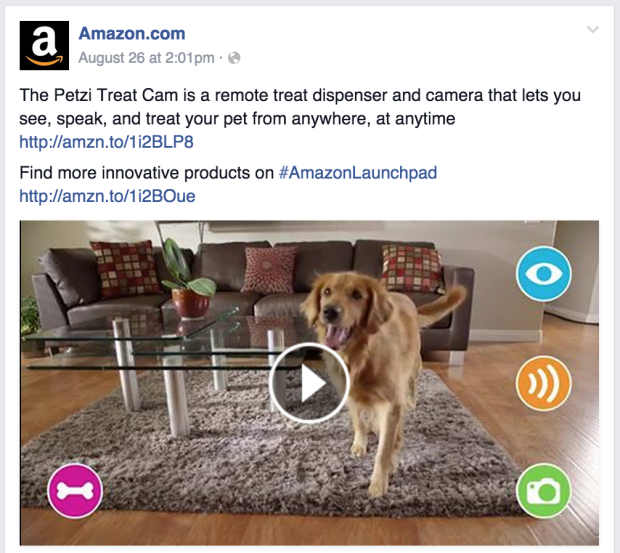 Not only did Petzi not know the post was about to go live, it had no idea something like this would be all that significant.

Petzi sells a $170 webcam that lets owners talk to their pets while they’re away, and even dispense treats from afar with the push of a button. (It’s a competitor to iCPooch, which we’ve covered extensively on GeekWire.) Petzi launched just four weeks earlier, and was immediately inducted into Amazon’s new Launchpad program. The initiative aims to use the e-commerce giant’s influence to catapult selected startups.

That day, Petzi had been chosen.

“We had no idea even what that meant, the massive awareness that just one post can have,” company CTO Simon Milner said. “We saw the post go out but it wasn’t until 7 p.m. that we really got a feel for what it would do.”

Phones started ringing, social media accounts stared exploding, and investors were trying to make contact with the Silicon Valley company. Just two people were left in the office when Amazon’s post went up, so Milner said he started calling around to get everyone back in the office.

We had no idea even what that meant, the massive awareness that just one post can have.

The team turned the conference room into a war room. Popcorn was all they had on hand, so that ended up being what fueled the biggest night in the startup’s young life. They were experiencing exactly the kind of viral moment every startup with a whacky idea dreams of, and they couldn’t let it go to waste.

By the end of the workweek on Friday evening, the video in Amazon’s Facebook post had 112,000 views, 3,800 likes and and 3,400 shares. (Amazon’s Facebook page has nearly 26 million likes overall) The Petzi Treat Dispenser, meanwhile, was listed as the No. 1 new item in Amazon store under the household sensors and alarms category.

The whole experience underscores just what Amazon is capable of doing when it chooses to flex that e-commerce muscle. The Amazon Launchpad program featured 200 products when it went live in July, and behind each one is a startup waiting for the day it gets the big bump.

The dust still hasn’t settled from Petzi’s frenzied week, so it will be a little while longer until the company knows just how many units it sold — although they do know it will be a lot.

“The activity level went through the roof. It’s not even 10x; it’s in excess of 100x,” Milner said. “Based on normal levels, we would expect multiple times [previous] sales.”