A computer on every desk and in every home, running Microsoft software. Check. So now what?

That, in essence, was the challenge facing Microsoft for much of the last decade. The company’s original mission wasn’t so much a mission as it was a goal, and once Microsoft achieved that goal, the company was left grasping for a new purpose. 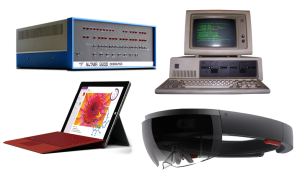 Which helps to explain the broad nature of Microsoft’s new mission statement, as outlined in Satya Nadella’s companywide “State of the Union” email on Thursday. “Our mission is to empower every person and every organization on the planet to achieve more.” The company can now set and work toward achievable goals that align with the mission, but the mission itself doesn’t expire. There’s no finish line.

So this is an attempt, at least, to lay the foundation for decades to come. It’s the latest in a series of steps that Nadella has taken to reshape the company since taking over as CEO in the past year, addressing everything from Microsoft’s internal engineering processes to its broader company culture.

But what about those “tough choices” Nadella mentioned in the email? Those two words have sparked a ton of speculation about the potential for cutting Microsoft products, possibly some of its hardware or devices, particularly those that weren’t mention in yesterday’s message. The departures of former Nokia execs Stephen Elop and Jo Harlow also contribute to this theory.

Discontinuing some of Microsoft’s first-party hardware is always a possibility, but it’s worth remembering that just a week ago, in a public email, Nadella name-checked basically every one of its major hardware product lines, including Lumia and Surface.

Mary Jo Foley writes on ZDNet, “Microsoft seems to have turned the corner with its Surface line, as it is now a billion-dollar business, revenue-wise. So I’m a bit skeptical Microsoft would drop its tablet line after investing quite a bit of time and money on getting it going.”

There’s obvious value in the company having at least some first-party devices. As Nadella wrote in yesterday’s email, “will build the best instantiation of this vision through our Windows device platform and our devices, which will serve to delight our customers, increase distribution of our services, drive gross margin, enable fundamentally new product categories, and generate opportunity for the Windows ecosystem more broadly.”

Bottom line, this 40-year-old company has given itself a much clearer path forward. The question now is how well Microsoft’s new leaders can navigate that path.