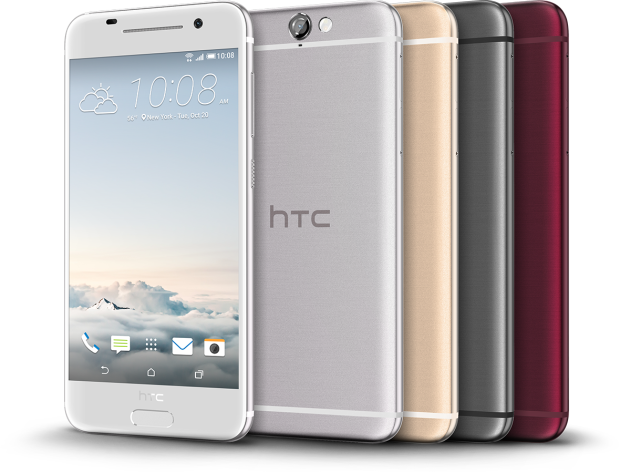 HTC announced a new phone today that might look a little familiar. While past HTC One phones have had curved backs and large stereo grills on the front, the HTC One A9 looks strikingly like an iPhone.

With a slight camera bump on the back, a circular two-tone flash and even a couple antenna bands across the rounded back, the new midrange phone from HTC doesn’t shy away from the current design trend among top-of-the-line phones. But that’s not necessarily a bad thing, as customers gravitate toward a design aesthetic pioneered by Samsung and Apple.

But the A9 isn’t all about copying another phone’s design. During the announcement livestream, HTC America president Jason Mackenzie emphasized the phone’s sound system and customization. The A9 comes with a built-in digital-to-analog convertor for higher sound quality and its version of Android comes with minimal extra software.

The HTC One A9 has a Snapdragon 617 processor, a 1080p display and a 2,150mAh battery with Qualcomm’s Quick Charge technology. A fingerprint sensor is built into the home button for faster unlocks and use with Android Pay.

On the software side, HTC emphasizes the Android 6.0 Marshmallow roots. While Samsung has options for its own payment system and other duplications of standard Android apps, the A9’s only added software is the Sense skin. The phone also comes SIM unlocked and users who want to tinker can unlock the bootloader without voiding the warranty.

Of course, the A9 has a huge camera, like many HTC devices. The main camera’s 13 megapixel sensor sits behind a f/2.0 lens with optical image stabilization for smoother shots. Video is captured in 1080p on both the front and back cameras.

The HTC One A9 comes with HTC’s “Uh Oh Protection,” which includes a free replacement within a year for cracked screens, water damage and carrier switching, and six months of Google Play Music.

The unlocked HTC One A9 with 32GB of storage is available for pre-order today for $399.99 in Opal Silver and Carbon Gray, with Deep Garnet and Topaz Gold coming later. The phone will ship in early November.

The A9 is also coming directly to carriers. Sprint is offering a lease with two months free starting Nov. 6 as the company’s first Android 6.0 device. An AT&T and T-Mobile variant will also be coming soon. That model will work with Verizon, but only on their non-CDMA network, limiting coverage.