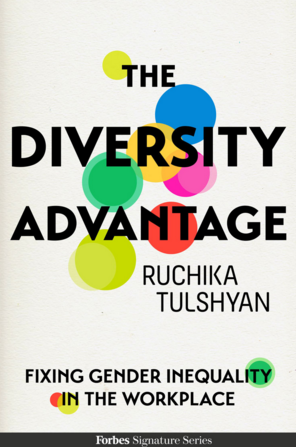 That’s one of the key points from Seattle-based journalist Ruchika Tulshyan’s new book for Forbes, The Diversity Advantage: Fixing Gender Inequality in the Workplace.

In the book, Tulshyan applies research to how businesses can find and promote women — very important as women are graduate with at least 50 percent of advanced degrees now and make up to two-thirds of the purchasing decisions in every household, as she points out.

Tulshyan is speaking at two events during Seattle Startup Week. Here, we talk with her about why diversity is an everyone problem, what’s holding women back in Seattle, and what we can all do to move forward.

How did your book come about?

Ruchika Tulshyan: I’ve been writing about women in the workforce for at least five years, and I’d cover all these issues and studies coming up about women facing different barriers to advancement.

When I moved to Seattle and started working in technology, suddenly I started seeing a lot of the issues I’ve been writing about for some years in person — like being cut off while I was speaking or not having any female role models — and seeing a lot of promotion and big business decisions made away from the office where women were not part of discussions, like at drinks offsite.

That’s when I thought there’s something here where it’s not necessarily about women leaning in or changing, but it’s about what companies can do to advance women. There’s no point of women “leaning in” if there’s no infrastructure in place for someone to be there for them.

You position this as not being a women’s issue but as a gender diversity and human-rights problem that affects bottom-line economics. Do you see more men acknowledging this yet?

RT: I think one of the reasons they don’t see it that way is that it isn’t talked about in that way. For a very long time, the conversation was “you’re doing the wrong thing,” “it’s a woman’s problem,” and “we have a women’s initiative in the company where women meet each other so we’re doing something.”

What started happening is that companies thought they were fixing it, and they have a quota and say, “Look, we’re at 30-40 percent female!” But nobody is looking at that in advancement — there’s no point if the top three levels of the company are 95 percent male.

That’s the case in a lot of companies. At end of the day, I wanted to refocus the conversation as an employee-retention problem. It is a bottom-line issue, and a lot of these strategies I mention in the book are what will also keep millennials engaged.

When I make recommendations — like paid parental leave, more work-life flexibility — these are things that are not just women’s issues. It’s going to impact companies big time if they don’t wake up and pay attention to these things.

What happens to most women? Why do they stagnate?

Actually in companies big and small, more women enter the workforce. More women are getting college degrees than men. A lot of MBA classes, at places like Harvard and Stanford, are almost 50 percent women. It is gender-balanced for a while, and women graduate with these top degrees, and they enter the workforce very excited, but over time there are systematic barriers to them advancing.

For example, companies place a big premium on negotiating that first salary. Women don’t negotiate salaries, and when they do they are penalized for it. We’re expected to behave more feminine and asking for more money is not seen that way, so you’re damned if you do, damned if you don’t.

Women continue to get penalized in promotions as they’re climbing the ladder. There are a lot of assumptions in place, like “she’s a woman, I don’t think she’ll want this opportunity,” or “of course she won’t want to travel abroad because she has kids.” All these assumptions are made, and it’s very damaging for women. And we certainly don’t have a childcare infrastructure in place in the U.S. today to really allow women to rise up the ranks.

Eventually it’s just this imperfect storm of these barriers that just continue to be put up, and we find that eventually 43 percent of women with children leave the workforce.

Seattle is not particularly good [our city is No. 20 globally for women in tech] at fostering women-owned companies. What are the biggest roadblocks here?

A few days ago, I had dinner with a woman who is doing her own startup and her credentials are really impressive. She has worked for the two largest tech companies here and has a lot of experience under her belt, but when it comes to her startup, she says that a lot of people are very patronizing about it.

There are a lot of women looking for seed funding, and a lot of investors have a very patronizing boys’ club. It’s certainly who you know and how much time you’ve spent with them, but that can be very difficult and demoralizing when women meet with investors, some of sharpest brains in the city, and you get talked to like a 5-year-old.

When it comes to women starting companies, another big part is having the financial means to do so. If you look at gender pay gap in Seattle, it’s pretty crazy.

In 2013, a woman working full time in King County earned $16,000 less than a man. This adds up $4.9 billion annually in King County. [Data is from the Seattle Metropolitan Chamber of Commerce and Women’s Funding Alliance report on gender equality.]

You talk about how aggro the hiring process is with words like “rock star,” “assertive” and “aggressive,” used in job descriptions, which turn most women off. What are the biggest mistakes companies make with women in the hiring process?

One part is those job listings. When I look back at the job listing I applied for in content marketing, it was all analytical and numbers and had little to do with the actual job’s duties. I am those things and I do those things, but a lot of the words just completely went over my head. I think that happens to a lot of women, whether it’s meant to be very aggressive or analytical, all these can be very off-putting to women.

A big part of being thoughtful, as this post by Textio’s Kieran Snyder points out, is that only 34 percent of job listings nationally include the most minimal equal opportunity statements. It matters, certainly if you’re a minority, whether you’re female, a person of color or LGBT, it ends up mattering if that EOE statement is included.

In tech, the interviews I’ve had have always been all male. Always. That certainly deters a lot of women.

Another is the type of language used when talking to candidates. If you were speaking to a candidate about your company culture and say things like “We work 24 hours a day, and we’re really focused on crushing the numbers and forget about having a life outside the office,” what kind of message are you sending to women?

What can women interested in starting a company do?

A big part is finding the right type of partners and the right type of investors. After watching my talk, Techstars reached out to me about diversity and have set huge diversity targets for themselves, and Chris DeVore recently wrote that op ed for GeekWire about it.

Another big part is the realization that there are resources out there and looking at the right resources. I think minds will change, but only when you see other competitors doing well and being successful.

For example, companies are suddenly competing over maternity and parental leave. That’s fantastic. Amazon changed its policies — that’s a big deal. Companies are realizing that they’re missing out on smart people who might make up a big part of their workforce.

Tulshyan is speaking at two events for Startup Week: “Building Diversity Into Your Startup” on Tuesday at 3 p.m., at Chase Basecamp, 220 2nd Ave S, and “Cultivating Diverse and Inclusive Teams/Cultures” Thursday at 9 a.m. at Makers, 92 Lenora St. (full, but there’s a waitlist).

Watch Tulshyan’s talk she gave at Ignite in September on diversity below: