It’s no secret that the Seattle area is a hotbed for engineers, scientists, mathematicians and other highly-skilled technology professionals. Whether hanging around the suburban campus of Microsoft or the life sciences corridor near South Lake Union, you’re bound to bump into people building and creating products that could change lives.

In fact, Washington state has a greater percentage of people working in STEM fields when compared to 11 peer states in the U.S., according to a study released today by the Technology Alliance. (See chart above).

“A strong STEM talent pool is particularly important to attract, grow, and retain innovation-based companies,” according to the report. “Washington performs particularly well in this measure, thanks to anchor tenants like Microsoft and Amazon, as well as hundreds of other employers.”

In fact, 9.2 percent of the jobs in Washington state are STEM related, compared to 7.6 percent in California and 5.1 percent in New York. A separate report released this week by Nerd Wallet found that the Seattle area is the fifth best city in the country to find word in STEM fields.

It goes on to detail the strength in the region’s entrepreneurial ecosystem and R&D organizations.

But the report from the Technology Alliance, which is hosting its annual State of Technology luncheon at the Westin in downtown Seattle on Friday, is not all rosy. In fact, the one area of real weakness remains public education.

The report finds that Washington state ranks 42nd in the U.S. in the number of high-school kids who graduate on time.

Meanwhile, at the college level, bachelor degree production has continued to worsen, with the state now ranking 39th in total bachelor’s and 34th in natural sciences and engineering bachelor’s production. That compares to 37th and 32nd, respectively, in 2011, and 32nd and 31st in 1998. 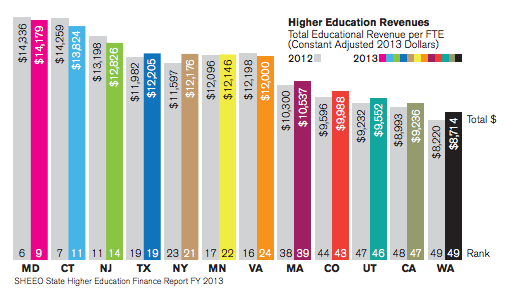 “There is a deep disconnect between our competitiveness in measures of an educated, innovative workforce and the capacity to produce such talent in our own state. Technology companies have many thousands of unfilled jobs, but our ability to prepare Washington citizens to fill them is extremely limited. Lack of capacity in our higher education system has negative implications for our state’s students, as they are denied access to high-impact career opportunities. At the same time, a shortage of available local talent slows company growth and as a result, negatively affects overall regional prosperity. Lack of available talent is the number one challenge for innovation-based companies in our state, and our inability to solve this problem threatens our long-term success and global competitiveness.” 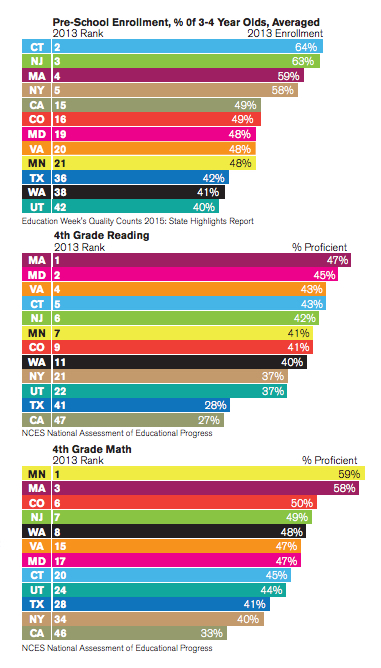 In an interview with GeekWire last week, outgoing Technology Alliance executive director Susannah Malarkey said she wished the region could have made more strides in education during her 20-year run at the helm of the non-profit tech association. Malarkey said the education problem is not an easy one, and it takes investment and a “real willingness for institutions to truly change.”

“This is a problem for the whole state to take on,” said Malarkey. “And, even though we are a broken record, we have to keep saying it because if we don’t say it, who is going to. And we really need to be clear that Washington companies want to hire more Washington kids.”

Other findings from the report:

—Washington ranks 5th in the nation for venture capital-backed exits, an increase in the number of VC-backed exits with 27 exits in 2014, up from 25 in 2013.

—Industry R&D spending dominates overall, with Microsoft’s R&D budget at $11.4 billion, nearly ten times larger than the next largest institution in the study, the UW, which receives over $1.2 billion annually in research funding. Microsoft’s R&D budget has nearly doubled from 2005. Amazon, meanwhile, spent of $9.275 billion on R&D in 2014.

—Only 37 percent of students both graduate high school on time and enroll directly in college after high school.