The message to entrepreneurs at GeekWire’s annual Startup Day was simple: listen and learn.

It could be seen at the “StartUp Demo Zone” where more than a dozen new companies shared their presentations. It was evident in the “Resource Room,” where people asked advice about everything from financing a startup to forming partnerships.

But nowhere was the message more on display than on the center stage, where entrepreneurial heavy-hitters shared the story of their startup journeys — and what they learned along the way.

SkilledUp’s “Fearless Careers” podcast host, Ander Frischer, spent the day at the conference. Here’s what he heard (and learned).

On the shape of potential employees

“When we hire people we usually look for people who are ‘T-shaped,’ who have depth in either creative design or engineering tech … If they have a breadth in business and sales, but they’re deep in one of those areas, then that’s super interesting for us,” Sood, a former general manager at Microsoft Ventures, said.

On learning and failing — fast

The ability to learn fast and fail fast — or as GeekWire’s Daniel Rossi puts it, “sucking up knowledge like a sponge” and learn quickly from your mistakes – are essential for successful entrepreneurs.

“Whether you’re on the tech side of things or the business side, learn quickly and fail fast,” said Rossi, the chief business officer.

On being a ‘force of nature’

You can never give up, and you can’t quit, she said. It’s especially true, she said, if you have raised money.

On the must-have skills

Beyond the mandatory hard skills to do your job, the must-have skill is the ability to “fit in our family,” said Ryan Cunningham, a vice president at ClipCard, one of the startups in the Demo Zone.

“It’s an intense ride, and it’s not just about the code you can write. It’s about how you can do it, and how you think it through,” Cunningham said.

On education and entrepreneurship

“Education is being sped up by entrepreneurship,” said Sood, the head of Unikrn.

Universities are going to have change their curriculums, if they are going to compete because “you can learn a lot more in an accelerator than you can in a four-year degree program,” he said.

Going to school isn’t quite enough these days, according to Josey Sandoval, co-founder of RentMyWay, another startup in the demo zone.

“You have to have projects under your belt. You have real-world experience of ‘I built this. I did that. I’ve done this list of things in addition to what I learned when I sat in a class,’” he said.

“Getting outside of the bubble of just the academic realm, and being able to pull yourself more into the what’s happening right now in industry is huge.” 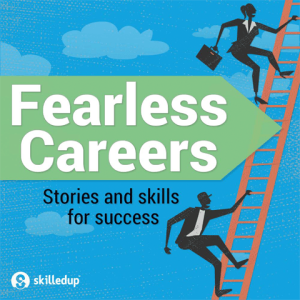 What does it take to be a fearless professional, an industry leader or an up-and-coming go-getter? Find the answer with Fearless Careers, a daily podcast that offers inspirational stories, concrete insights and actionable advice from the very people who have succeeded at their profession. Whether you’re a self-employed freelancer, making a career change or climbing the corporate ladder, these stories will inspire you to learn new skills, gain confidence and kick-start your own fearless career. For more information visit SkilledUp.com, proud sponsor of Fearless Careers. Hosted and produced by Ander Frischer.

You can also listen to this podcast via mobile on iTunes for iOS and Stitcher on Android devices.