We’re hosting a fun GeekWire event in Seattle on Thursday evening, and you’re invited to attend.

The event is a special recording of the GeekWire radio show and podcast at the Microsoft Store at Seattle’s University Village, and we’re pleased to announce that our special guest will be Larry Hryb, better known as Xbox Live’s Major Nelson, who knows a thing or two about this podcasting stuff.

Be sure to register for the event below if you plan to attend. Registration is free, but space is extremely limited.

We’ll be talking about the latest video games for the holidays, Xbox One backward compatibility, the competitive battle with the PlayStation 4, the rise of Esports and the Halo World Championships, and much more. As an Xbox 360 holdout at home, I’m also planning to challenge Major Nelson to persuade me to finally make the leap to the Xbox One. 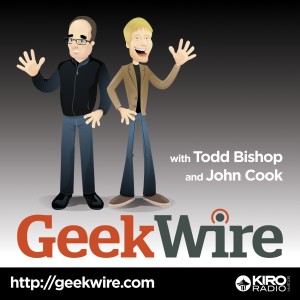 The event will take place from 5 p.m. to 7 p.m. this Thursday, Dec. 3, at the Microsoft Store in Seattle’s University Village. In addition to giveaways and a fun tech trivia contest on the show, the first 15 people to arrive on Thursday will be entered into a drawing for an Xbox One, courtesy of Microsoft, so you’ll want to show up early to be included in the drawing.

Thanks to our hosts at Microsoft for making the event possible. We’re presenting this special version of the podcast and radio show during Microsoft’s 12 Days of Deals campaign, and we’ll be back again to do another recording on Dec. 10 at the Microsoft Store in Bellevue. Stay tuned for more details on that.

Register to attend here, and see you Thursday evening!