We know it’s illegal and dangerous, but the temptation to send a text message or make a phone call while sitting at a red light or in traffic — or worse, while driving — is all too real.

That especially seemed to be the case in Seattle last year, when more drivers were busted for talking on the phone than in any other year since the law went into effect. In 2014, Seattle police handed out 2,249 tickets to drivers who were talking on the phone, a 22 percent jump compared to the year before, according to data requested by GeekWire from the Seattle Municipal Court. 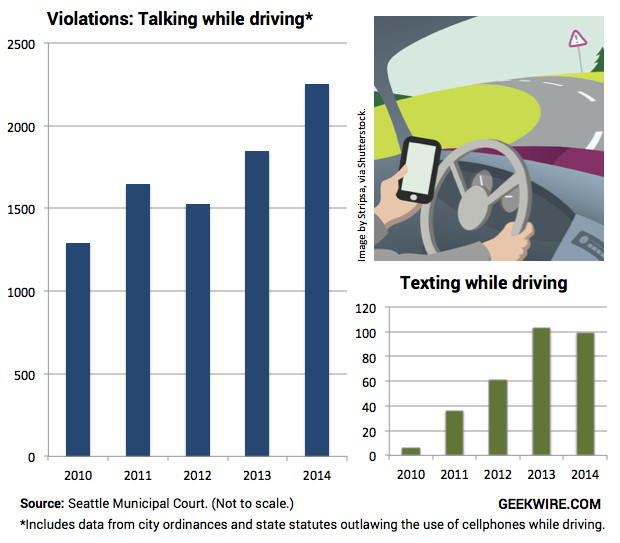 (Note: The data provided by Seattle Municipal Court includes citations for both city ordinances and state statues. Since a vast majority of the tickets were issued using city laws, especially in more recent years, we combined the data to get a more complete picture.)

In June, it will be five years since Washington State made it a primary offense to use a handheld cellphone to talk or text while driving. In 2010, 1,288 tickets were written for driving while talking and only six for texting. Since then, the number of citations have climbed steadily (except for a one-time drop in 2012). Prior to 2010, talking on a cellphone or texting while driving was a secondary offense, so officers could only ticket people if they also violated another traffic law.

So, why after five years are more people getting busted for talking at the wheel? Are police being more vigilant, or are drivers being more sloppy?

Seattle Police Public Information Officer Drew Fowler said he’s not sure why tickets are up in 2014. He said looking for offenders is just part of an officer’s routine. The department did not give any special instructions to look out for drivers using their cellphones last year.

What’s more, he said, the data above likely doesn’t provide the whole picture. Fowler, who was a patrol officer less than a year ago, typically wrote warnings. He said people “need a nudge to get on to the right path every once in a while.”

It’s not a surprise that fewer tickets are issued for texting. Once, he did catch a driver texting, but it’s rare. In that case, he was on foot and that person was at a stoplight. It’s easier to witness someone holding up a cell phone next to their head than “someone who is discretely texting at waist level,” he pointed out, adding that he also issued that person a warning.

The number of citations being issued at the state level is much higher. Officers in Washington busted 39,389 drivers for driving while texting or talking in 2013, according to The Washington Traffic Safety Commission, which has not yet gathered data for 2014. The data doesn’t include the City of Seattle, which issued less than 2,000 tickets during that same time period for both talking and texting.

In early 2013, the four major wireless companies launched a joint public service campaign, with the tagline “It Can Wait.” But despite that, cell phone-related car accidents are still up modestly. The National Safety Council’s 2014 annual report found that phones caused 26 percent of the country’s car accidents in 2013, with only 5 percent of cellphone-related crashes occurring because the driver was texting.

So, GeekWire wants to know: What’s your history when it comes to using cell phones in the car? Have you ever been busted? Do you prefer to wait until you’ve reached your final destination, or can you still not resist the temptation to tap away at any given opportunity? Please share your stories in the comments below.