Seattle residents are one step closer to having more rentable vehicles available to get around town.

The city’s Transportation Committee today voted 3-0 to approve new legislation that will allow up to four “free-floating car sharing pilot programs” in the city. The ordinance now moves to the full Council, which will vote on the new rules on Jan. 20. The committee made a few minor changes to the original legislation proposed by Mayor Ed Murray, but the bulk of the regulations remain the same. 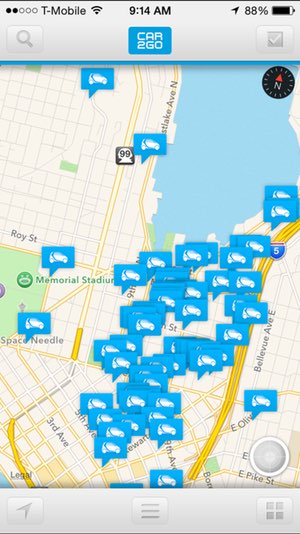 Here’s what you need to know: The city has seen demand for Car2go rise during the past two years. Car2go lets people locate and rent available smart-cars with their smartphone or computer, drive to their destination, and park the vehicle in any approved city parking spot. The service originally launched in early 2013 with 350 cars, but the city approved the addition of 150 more vehicles several months later. There are now more than 59,000 registered Car2go members in Seattle.

The proposed legislation will allow three other companies to enter the market with up to 750 permits each. That means by the end of 2015, there could hypothetically be nearly 3,000 free-floating cars available to people looking to get from point A to B in Seattle. After one year, city officials can change the number of permits and operators depending on data it receives from each company.

If the legislation passes, each car-sharing company could receive 500 permits, and up to 750 if they agree to provide service in more areas of Seattle — Car2go could add another 250 vehicles if it broadens its reach. The legislation also calls for modest increases in permit costs for each company that, according to the city, “more accurately represent program costs.”

One company that has expressed interest in offering free-floating vehicles in Seattle is BMW, which operates its DriveNow service in six European countries and more recently launched in San Francisco with electric cars. BMW DriveNow CEO Rich Steinberg said last month that he’s been watching the regulatory environment in Seattle and is waiting for city officials to take action.

“If the regulations move forward, Seattle would be a great city for us to enter,” he said. “We recognize certain attributes of the progressive nature of citizens that make it conducive to car-sharing and Seattle ranks high on our list.”

As Steinberg noted, Seattle residents seem to like services like Car2go, which said last month that Seattle was the company’s largest U.S. market.

Another potential competitor could be Zipcar, which typically operates a round-trip service but recently launched a one-way program in Boston.

More car-sharing companies would add to new transportation options that have arrived in Seattle as of late. In July, the city council approved a regulatory framework that allowed on-demand transit startups like Uber, Lyft, and Sidecar to operate legally in the Emerald City.

You can find more information about the pilot program in this presentation, and you can read the full legislation below: