Rover.com, the Seattle-based startup that connects dog owners with people to care for their pooches, today announced a $25 million funding round led by Technology Crossover Ventures.

The new round included participation from existing investors like Foundry Group, Madrona Venture Group, Menlo Ventures, and Petco. Total funding for the three-year-old company is now past $50 million.

Rover CEO Aaron Easterly told GeekWire that the fresh cash will be used to expand geographically and build out additional services. The company currently has 80 employees — a number that has doubled in the past year — and Easterly expects that to grow with the new funding.

Rover raised a $12 million round almost exactly one year ago and is one of the most heavily funded of the online pet sitting marketplaces. It competes with DogVacay, a Santa Monica, Calif. company also offering a dog-boarding service online that has raised $47 million.

Rover, first conceived at a Startup Weekend event in Seattle four years ago by Madrona’s Managing Director Greg Gottesman, claims it is the nation’s largest network for connecting dog owners with dog lovers for hire. The startup has now more than 40,000 sitters in the U.S. across 10,000 cities. Meanwhile, revenue brought in by sitters on Rover has spiked 5X over the past year. 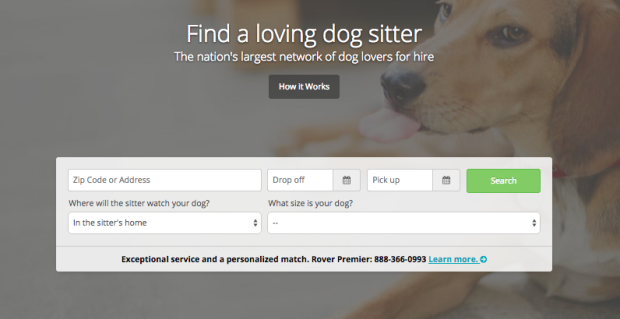 In August, Easterly told us that Rover was pulling in “seven figures” worth of revenue every month.

“We invest in market-leading technology companies that we believe have huge potential and are poised for massive expansion, and Rover is a great fit,” David Yuan, General Partner at TCV, said in a statement. “Even as Rover has grown to become the largest network in the US, it has earned unparalleled customer satisfaction and loyalty.”

Rover and DogVacay often draw laughs from critics who believe the companies aren’t legitimate tech businesses, harkening back to the dot-com boom days of Pets.com. But just as Uber and Lyft are now attempting to upend the traditional taxi cab market by allowing just about anybody to become a cab driver, so too are the online pet sitting marketplaces, transforming how Americans find overnight care for their beloved pets.

As a result of the funding, Yuan is joining Rover’s board. Jeremy Wacksman, Vice President of Marketing and Product Management at Zillow, will also join Rover’s board.