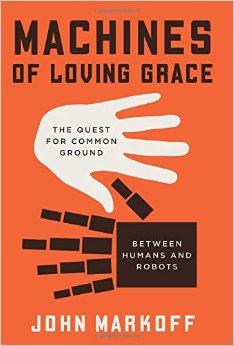 Advances in machine perception and robotic dexterity could make it possible for humans to “disappear entirely” from Amazon’s fulfillment centers, writes veteran New York Times reporter John Markoff in a new book about the history and future of artificial intelligence, and the use of machines to augment humans.

A passage in the book, Machines of Loving Grace, cites a secret experiment that was taking place as recently as December 2014 at Amazon’s fulfillment center in Tracy, Calif., involving a robotic arm specializing in “piece pick” operations. Amazon uses robots extensively at its fulfillment centers, but picking pieces from shelves is a function still reserved for human workers, in part because robots have trouble grasping and manipulating objects of unpredictable size.

Citing factors including Amazon’s past struggles with warehouse workers around the world, Markoff writes that Amazon’s existing Kiva robots — which transport items on shelves around the company’s fulfillment centers — are “clearly an interim solution toward the ultimate goal of building completely automated warehouses.”

Not so fast, says Amazon. Asked for comment on the book this week, the company downplayed the possibility of fully automated warehouses.

UPCOMING EVENTS: John Markoff will speak about his book with GeekWire’s Todd Bishop on Sept. 15 at Town Hall in Seattle, and with Microsoft Research chief Peter Lee on Oct. 1 at the GeekWire Summit.

“Our fulfillment centers are a symphony of robotics, software, of people and of high-tech computer science algorithms – machine learning everywhere—and our employees are key to the process,” said an Amazon spokesperson in a statement. “There has been no job loss associated with the use of robotics in our buildings and in fact due to increased efficiencies, some of our buildings utilizing robotics have the highest headcounts in our network.”

However, Amazon has been openly exploring the possibility of robots that could pick objects off shelves, through initiatives including the Amazon Picking Challenge in Seattle earlier this year. The team that one the challenge, RBO from Berlin, used a robot with a suction-powered gripper.

The question of job loss gets to the heart of the issues covered in Markoff’s book, which was published this week.

Machines of Loving Grace explores the potential of technologies including self-driving cars, drones, and robots, and much more, as well as the increasingly adaptable and intelligent software that powers such devices, and the rise of intelligent systems such as Siri and Cortana. But the book also examines the debate over potential job loss from these technologies, plus the divide between engineers who are aiming for machines with artificial intelligence, and those instead developing technologies to enhance and extend human capabilities.