RideScout and GlobeSherpa are teaming up to solve the “last mile” transportation problem and help people move around cities.

RideScout, an Austin-based startup that bills itself as the “Kayak of ground transportation,” today announced the acquisition of GlobeSherpa, a fast-growing Portland-based company that develops mobile ticketing software for public transit agencies in cities like Portland, San Francisco, and Chicago.

Terms of the deal were not disclosed. GlobeSherpa will maintain its brand, retain its 27 employees, and keep the same office in the Rose City.

RideScout, which aggregates public, private and on-demand transportation options in one place, will incorporate GlobeSherpa’s technology and allow users to purchase transit tickets on its app.

GlobeSherpa will continue selling its mobile ticketing service to public transit agencies — its TriMet app reached 1 million purchases in eight months — but CEO and co-founder Nat Parker told GeekWire that the deal with RideScout gives his company an opportunity to grow even more than before.

Parker is particularly focused on solving the “last mile” problem. People without cars can often get within the vicinity of their homes, but not quite all the way.

“The challenge for these agencies is how you get people through that last mile — how do you get them home?” he explained. “GlobeSherpa has really been solving the core of the commute, helping people book and pay for their journey with mobile tickets on trains and busses. But we’ve continuously run into the challenge of how we might add value for the last mile. RideScout is pushing the envelope on pulling together different players and providers in the transportation ecosystem into one easy app.”

RideScout, which was founded by two Army veterans in 2011 and has raised $3 million to date, was itself acquired by moovel GmbH this past September. Moovel is a subsidiary of Daimler AG, which owns Car2go.

RideScout CEO and co-founder Joseph Kopser said mobile payments are the “next critical step” for his company as it “moves to organize the entire mobility ecosystem.”

“With GlobeSherpa’s mobile ticketing technology, RideScout plans to advance their intermodal mobility platform, advancing access, booking, and payment within their mobile product,” Kopser told GeekWire. “We’re excited to work with them in this journey.” 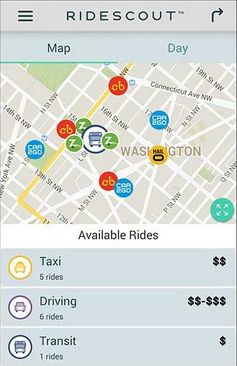 Parker and Kopser met at a conference and it didn’t take long for the CEOs to realize that a partnership could be mutually beneficial. Parker said that the two startups have “similar DNA, with innovation at the core of each company.”

“Hands down, partnering with RideScout and becoming part of that family is absolutely the best thing for us,” Parker said. “With this comes people, technology, relationships, and an even bigger and more audacious vision that we really believe in. This was an easy decision in that respect.”

Parker will remain GlobeSherpa’s CEO and said he plans on quickly hiring more employees as a result of the acquisition. GlobeSherpa is a graduate of the Portland Seed Fund and had raised $3.5 million to date.