Turns out people like having a way to filter their water on the go. 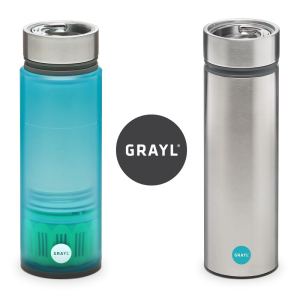 Seattle-based startup Grayl has raised $800,000 of a $1 million round from angel investors and will use the fresh funds to continue developing its innovative water bottle.

Grayl’s “Water Filtration Cup” looks and works like a French Press. You pour water into one cup, and then use a filter — which doubles as an inner container — to “press” the H2O using Grayl’s patented system. The process takes about 15 seconds and you’re left with cleaner water that is safe to drink.

Grayl, which sells its product online and in 300 stores across the U.S., will use the new cash to expand internationally, grow its team of four, and produce enough inventory to meet demand. The company was recently featured on a new Science Channel TV show called “All American Maker” that mimics Shark Tank.

“It was a blast,” said co-founder Travis Merrigan. “We were pitted against three other companies in our episode — got some great product feedback, and some great contacts.”

Grayl was also selected as one of our Seattle 10 companies late last year, which included local tech startups developing revolutionary technologies that could one day translate into large businesses. Each company re-produced their business ideas on the massive napkins, and you can see Grayl’s above.