Elon Musk stopped in Seattle on Friday evening, on his way to Mars.

The SpaceX founder and Tesla CEO slipped quietly into town to speak at a private event at Seattle Center — where he revealed previously unannounced details about SpaceX’s plans for its fledgling Seattle-area office.

Musk told the crowd that the Seattle office will be the headquarters for a next-generation space Internet initiative, aiming to transform the way Internet service is delivered. The idea is to launch a vast network of satellites that would boost data speeds and make low-cost Internet available around the world.

SpaceX declined to allow media at the event, but GeekWire was able to confirm the details with people who were inside.

In an interview prior to the Seattle announcement, Musk told Bloomberg Businessweek that will it take about $10 billion to get the Internet service off the ground. He told the magazine, “Our focus is on creating a global communications system that would be larger than anything that has been talked about to date.”

But the plan is even more ambitious than that: Ultimately, Musk intends to use the project as a stepping stone to Mars, providing connectivity and funds to colonize the Red Planet.

“People should not expect this to be active sooner than five years,” Musk told Bloomberg Businessweek, describing the plans to deliver Internet access from low-Earth orbit. “But we see it as a long-term revenue source for SpaceX to be able to fund a city on Mars.”

[Follow-up: Video and transcript of Musk’s comments at the event]

People inside the Seattle event said Musk cited the possibility of as many as 4,000 satellites in the network, replacing each one every five years. The satellites would orbit at 750 miles above Earth, much lower than traditional satellites, to deliver significantly faster Internet service.

A SpaceX spokesman said the company would have no further public announcement, for now, beyond the details released in the Bloomberg Businessweek interview. People who were inside the private Seattle event said Musk was clear and definitive about the plan, including the part about ultimately colonizing Mars.

There were about 400 people at the event at Seattle Center’s Fisher Pavilion, including government officials and potential SpaceX recruits — many from local tech companies — who heard Musk talk about his plans for the Seattle office. Musk said earlier this week that the office will start with 50 or 60 employees but will eventually house up to 1,000 new workers over the next several years.

SpaceX’s new office also bodes well for the regional economy, with the potential to fuel the commercial space industry for years to come. Washington Gov. Jay Inslee, who lauded SpaceX’s plans during his State of the State address earlier this week, met with Musk at the Friday event.

Great meeting with @elonmusk tonight. WA is ready for the next space revolution! @SpaceX pic.twitter.com/SV1nH135q0

Although SpaceX didn’t announce a specific location for the new Seattle-area office, permit filings found by GeekWire earlier this week showed that the office is in Redmond, just down the road from Microsoft. Musk has not yet determined where to put the satellite production factory — an unclaimed prize for which Washington and other states will no doubt compete fiercely.

We want the best engineers that either live in Seattle or that want to move to the Seattle area and work on electronics, software, structures, and power systems. We want top engineering talent of all kinds.

The arrival of SpaceX also creates a major new competitor in the already intense battle for technical talent in the Seattle region. Even before this week’s announcement, as far back as October, the company was starting to hire engineers from Microsoft and other technology companies with offices in the region. The presence of Boeing and other aerospace companies also will make the Seattle region a fertile ground for recruiting for SpaceX.

“We want the best engineers that either live in Seattle or that want to move to the Seattle area and work on electronics, software, structures, and power systems,” Musk told Bloomberg BusinessWeek. “We want top engineering talent of all kinds.”

The new SpaceX initiative, which has not yet been named, will compete against another new space Internet venture, OneWeb, announced earlier this week by Musk’s longtime friend, Greg Wyler, and backed by Qualcomm and Richard Branson’s Virgin Group. Wyler and Musk differ sharply in their approach to the challenge, with Musk describing his plan as more sophisticated, and OneWeb backers questioning whether Musk will be able to get rights to the spectrum required to build the SpaceX network.

Employees in SpaceX’s Seattle-area office are also expected to work on the company’s existing commercial space initiatives, including the Dragon capsules and Falcon rockets. SpaceX was the first commercial venture to resupply the International Space Station, and the company won a $2.6 billion piece of the contract to fly astronauts to the ISS.

SpaceX’s current challenges include figuring out how to recover the Falcon rocket, after launch, using a vertical landing technique. The company’s first attempt resulted in a spectacular crash at sea last weekend.

Our request to cover the Friday event was declined by SpaceX representatives, but we went to Seattle Center to report from the scene, and just in case they changed their minds about letting media in. They didn’t, but we were able to take pictures from outside the venue, including the one of Musk at top.

And in this day and age, nothing like this is private. See below for a series of tweets with information and pictures taken by attendees inside.

Elon Musk: "This is the launch of @SpaceX Seattle" pic.twitter.com/7aFnTs5rcn

"It's really hard to add 500 people at once and have that be good." – @elonmusk on plans for slow, but steady growth at #spacexseattle 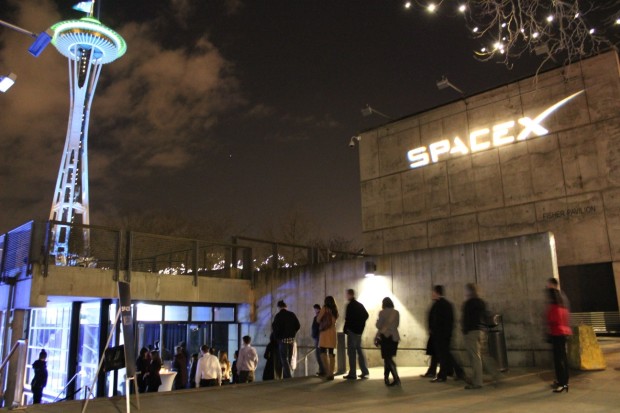 An iconic Elon Musk moment: A Tesla Model S next to the SpaceX sign under Seattle’s Space Needle. 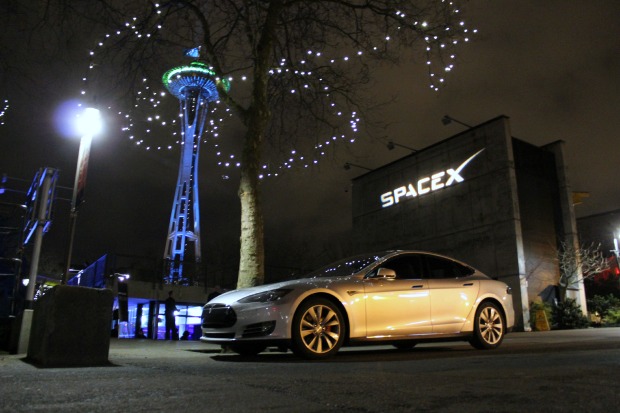 SpaceX also brought its Dragon capsule and let attendees get up-close-and-personal with the spacecraft.

After the Seattle Center event, the spacecraft will be delivered to the Museum of Flight, where it will be on display through the weekend. The Dragon was the first commercial spacecraft to resupply the International Space Station. 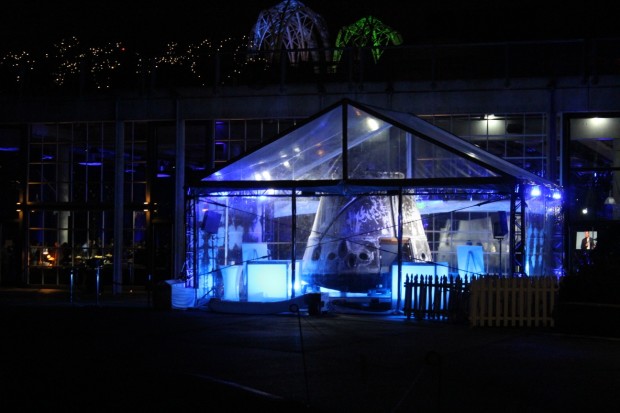 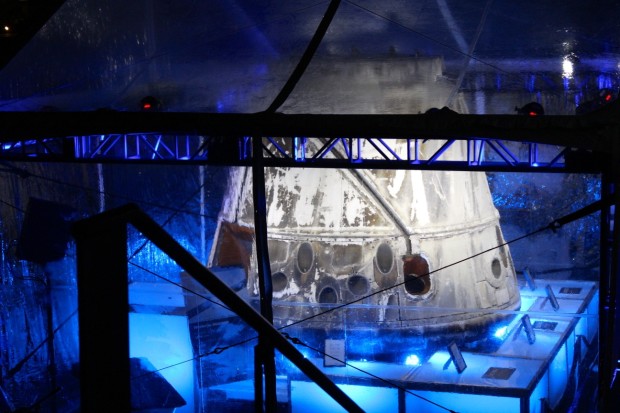 Throughout the event, people walking through Seattle Center stopped to gaze at the futuristic set-up. It was certainly hard to miss. 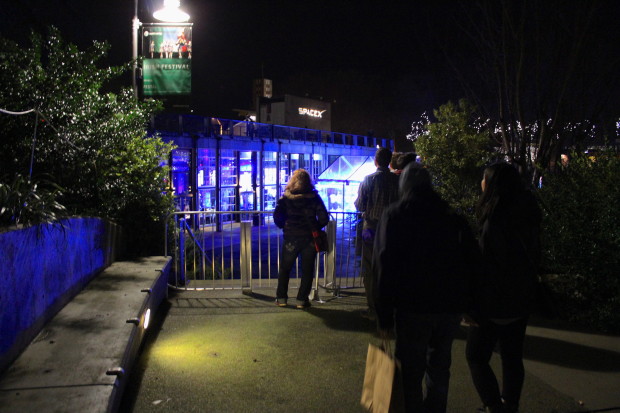 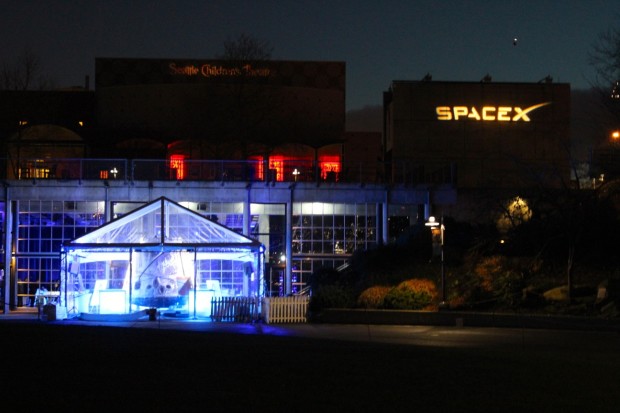