Video games and soccer will meet like never before on Sunday at CenturyLink Field.

Seattle Sounders FC players will don a custom jersey design for their home match against Los Angeles that’s all about one of the most anticipated video games of 2015: Halo 5 Guardians.

For the past six years, the Sounders have sported “Xbox” on their jerseys since the club entered Major League Soccer in 2009 as part of a sponsorship deal with Microsoft that was extended this past December. The original jerseys featured “Xbox 360,” but Microsoft has gone with the simple “Xbox” ever since.

But on Sunday, players will wear their alternate black jersey kit with an added Halo 5 logo beneath the “Xbox” branding. 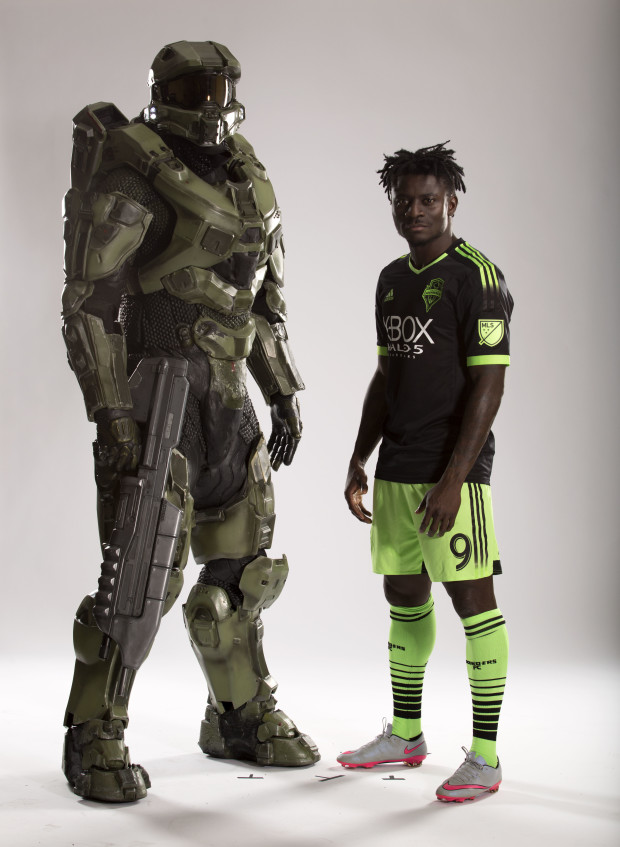 In addition to the special jerseys, players will also wear pre-match training tops that have Halo 5 branding.

“Initiatives like this are what make our partnership with Xbox so engaging and innovative,” Sounders FC owner Adrian Hanauer said in a statement.

Sunday’s match will also feature a number of other Halo 5-related giveaways and activities. For starters, 20,000 fans will receive a commemorative Halo 5 and Sounders FC t-shirt, while a limited supply of 200 Halo 5 jerseys will be available to purchase at the CenturyLink Field Pro Shop.

Fans can also check out a life-size Warthog vehicle in the Soccer Celebration pre-game activity zone. Finally, Halo 5 characters Master Chief and Spartan Locke will be roaming around the stadium throughout Sunday’s match — those who find them at halftime will have a chance to win a Halo 5 jersey.

“We are honored to partner with Sounders FC and have Halo 5: Guardians participate in this historic moment,” Bonnie Ross, head of 343 Industries, said in a statement. “We have so many Sounders FC fans at the studio, and we’ll be there in the stands cheering for them alongside the Master Chief and Spartan Locke.”

Aside from the jersey sponsorship, Microsoft always places Xbox-related advertising around CenturyLink Field on Sounders matchdays, while the field itself is referred to as “The Xbox Pitch at CenturyLink Field” during games. There have also been Xbox giveaways in the past.

However, this is the first time Microsoft is advertising a specific game on the Sounders jerseys, but given the anticipation for Halo 5, the timing seems appropriate.

Halo 5 is set for release on Oct. 27 and will be the third Halo installment from Kirkland-based and Microsoft-owned 343 Industries, which also developed Halo 4 and Halo: The Master Chief Collection after taking over the franchise from Bungie in 2007.

Halo 5 will be exclusive to Xbox One, likely forcing Xbox 360 owners to upgrade to the latest Microsoft console. Microsoft started taking pre-orders for the game in December.