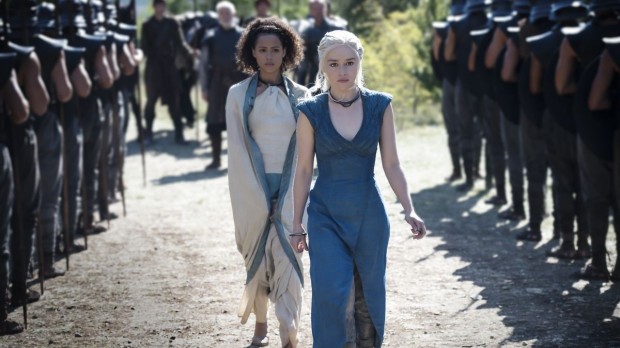 Earlier this month, we explored potential media rights ramifications for people who live stream sporting events with apps like Periscope. Now, we’re seeing the same thing play out in the entertainment world.

Mashable reports that “dozens” of Periscope users live-streamed the Game of Thrones Season 5 premiere on Sunday night and Monday morning across the world, offering a way for people without a cable subscription to watch the episode.

This, unsurprisingly, isn’t making Twitter happy. The company, which acquired Periscope last month, directed Mashable to the app’s Terms of Service that outline how users can be terminated if they infringe on copyrights.

“We reserve the right to remove Content alleged to be infringing without prior notice and at our sole discretion,” the terms note. “In appropriate circumstances, Periscope will also terminate a user’s account if the user is determined to be a repeat infringer.”

Game of Thrones is certainly no stranger to dealing with viewers who watch episodes illegally. But apps like Periscope introduce new ways for people to share their streams with the world, and it will be interesting to see how Twitter monitors users who are breaking the terms of service — especially given the partnerships it has with media and TV giants.

Meanwhile, Twitter is reportedly trying to convince celebrities and media companies to use Periscope instead of Meerkat. Let the battle begin.

Related: Periscope, Meerkat, and sports: Can fans, media live stream from the game